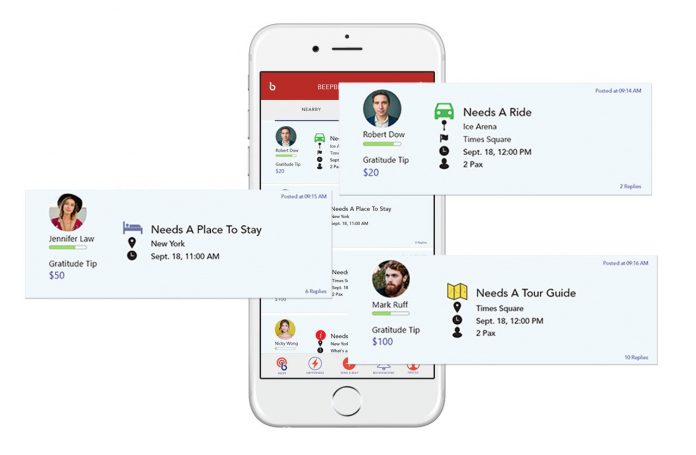 The soon-to-be-released BeepBeep Nation app (found at https://beepbeepnation.com) for both iOS and Android platforms provides a simple but powerful way to connect a person who needs help (a “requestor”) with a help provider (a “helper”).

The “help” in question can be any type of assistance. It can be requesting for a ride from one location to another, or for a place to stay, or for anything at all.

You’re probably thinking of Uber, and Airbnb. However, BeepBeep Nation not only offers the same benefits those two apps provide its users, those “services” can actually be free to the requestor, because in the app they’re now provided in the form of “help”, not as services.

“Help” means willful assistance by someone without any expectation of reward.  We help our fellow human beings all the time, willingly, and with good intentions. BeepBeep Nation simply makes this good behavior more efficient and effective to actively promote a culture of kindness amongst its users – which then makes the world a better place.

And because “help” can be in any form, BeepBeep Nation can offer benefits way beyond just rides and places to stay; from recommendations for a good Italian restaurant in town, to whether anyone has seen a missing family member or pet in a certain location, to getting help to rescue someone trapped in a lift, to getting a recommendation for a good baby sitter, to whether anybody has any Taylor Swift concert tickets to sell, to getting a medical officer to attend to someone suspected of having a heart attack – there is no end to the provision of value by one person to another at zero cost to the requestor, and in one single app.

In addition, the helper is able to choose who to offer help to. Likewise, the requestor is able to choose who to accept help from. As such, BeepBeep Nation is decentralizing the provision and acceptance of value by its users; it does not get involved in its users’ choices other than to further add value by enabling the free exchange between them and providing some guidance on the better members of its community of users in terms of who they’ve helped in the past, how often they’ve helped and what other users think of them, among other factors.

To use BeepBeep Nation, users purchase the upcoming EMINENT (EMN) token (see https://eminent.beepbeepnation.com), which will be built on the Ethereum ERC20 platform. Each beep for help requires a small amount of EMINENT, which then becomes BeepBeep Nation’s revenue. EMINENT tokens can also be used by the requestor to provide a Gratitude Tip to his helper, if the requestor wishes to offer it, although he’s not obliged to do so, and if the helper chooses to accept it, although he, too, is not obliged to do so.

It is perhaps fitting that a decentralized provision of value (BeepBeep Nation) is paired with a decentralized currency (EMINENT), the sum of which far exceeds each other individually.

Best of all? BeepBeep Nation makes everyone more social than even the best social media platforms that exist today, because the provision of help in many cases requires a meeting between the parties on a face-to-face basis, instead of interacting behind a smartphone screen all the time like all social media users do. We can truly go back to the days when real human interaction – the actual talking and laughing and sharing and caring in person – becomes the norm again.