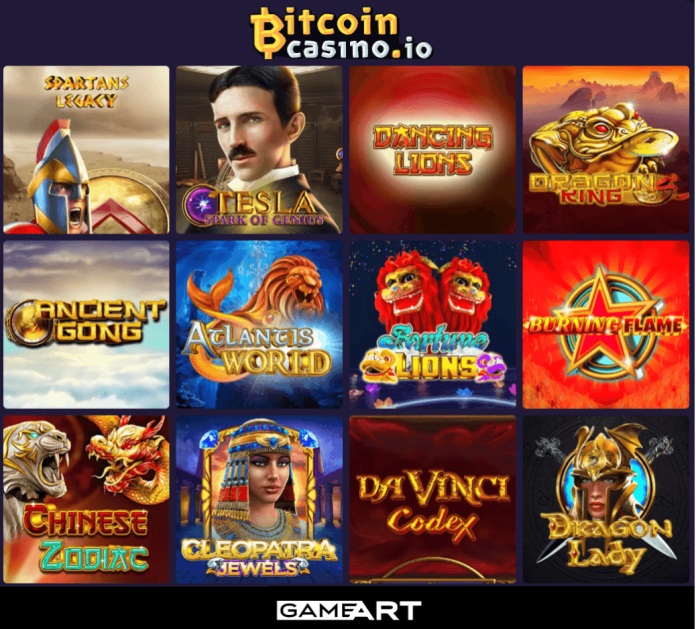 As the online gambling industry is a very competitive one, it is tough to stay on top when more and more companies are rapidly entering the field. To set themselves apart from any rivals, Bitcoincasino.io has added a variety of payment options and software developers to cater to all types of gamblers.

Bitcoincasino.io is not only an online casino that accepts bitcoins, though. As we mentioned earlier, the platform has also implemented a variety of other payment methods, such as other cryptocurrencies and fiat options.

While the casino has also listed titles from major game providers, such as NetEnt and Microgaming, it has also added new software creators, such as GameArt and No Limit City, as they show great promise with their new and exciting games.

GameArt is a relatively new company, having been founded in 2013. Even though six years of activity is not something to dismiss so easily, there are many veterans in the software gambling sector that have over two decades of experience. The company is registered in Malta, but they have established offices in the United Kingdom, Slovenia, and Serbia.

The main focus of GameArt is developing slots of high quality for both online and traditional casinos.

But the company does not limit itself to only providing casino games. It is also focused on developing solutions to land-based casinos, hosting services, SEO optimization, client support, fraud prevention, affiliate marketing, and VLT (Video Lottery Terminals). They also make customized slots based on what any customer wants.

Their slots games have become so popular in such a short span of time due to their innovative and attractive designs. All games have colorful and intriguing 3D graphics, and developers have done market researches in order to create relevant themes.

The intricately designed games feature a variety of themes that range from Egyptian to Asian, to fantasy and science. Game Art also offers free spin promotions and bonuses in their slots, and they differ from casino to casino.

The most beloved titles from this provider are Money Farm 2, Wild Dolphin, Atlantis World, Texas Rangers Reward, and the Da Vinci Codex.

What Slots Can You Play From GameArt?

Even though most would disagree that making slots is an art form, GameArt has shown them wrong. The slots feature incredibly appealing graphics with amazing animation quality, which makes them a work of art in their own right. All games support both Flash and HTML5 scripts and are fully compatible with mobile devices.

GameArt casino slots are not only beautiful, they are also a pleasure to play, as both beginner and veteran gamblers will find them entertaining.

Bitcoincasino.io has included 60 amazing games from GameArt’s portfolio which come with various themes and bonuses.