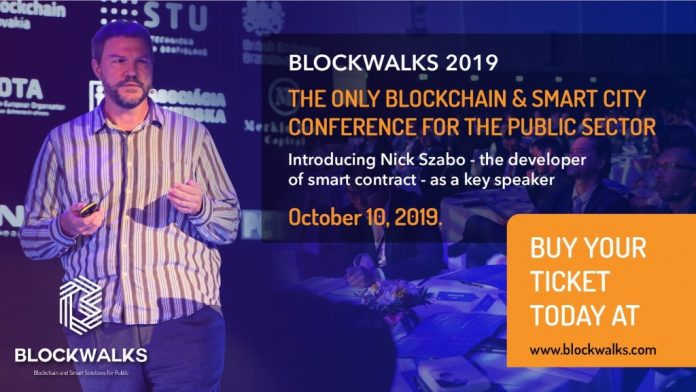 23 SEP 2019, BRATISLAVA – Right in the heart of Europe, the Bratislava Castle in Slovakia will host the second annual BLOCKWALKS European Conference. Top-level government officials and prominent industry leaders in smart technology, blockchain, and Internet of Things join to discuss the current and future applications of blockchain and smart technology in the public sector.

Tibor Vincze, the Project Coordinator of BLOCKWALKS 2019, had these words to say about the focus of this year’s conference:

“The conference is a response to the growing impact blockchain technology has on countries all over the world. As governments are starting to test out different blockchain solutions to improve their administrations and public services, it becomes extremely important to get the integration of blockchain right, especially when it comes to delicate information such as private data of citizens,”

“Industry leaders and government officials need to discuss and work closely to figure out the best ways blockchain and smart technologies should be infused with existing public services without compromising their integrity or causing inconveniences,”

As technology advances, it is essential that countries and governments keep up with the developments and consistently improve their operations to ensure the security of their services and the safety of their citizens.

Max Kaye, the Co-founder, and CTO of Flux, a decentralized gateway for voting in Australia, and a speaker at BLOCKWALKS 2018 says:

“If society never changes, it will be destroyed. This is an undeniable fact, whether it’s destroyed by ourselves or destroyed by something from elsewhere in the universe, we must react to problems,”

Last year, at BLOCKWALKS 2018, over 300 participants, from whom 30 were government representatives from 10 European countries, attended the conference to learn from and discuss with 18 blockchain experts about the role blockchain plays in the future of the public sector. This year, BLOCKWALKS 2019 is honored to host the following keynote speakers:

The conference will take place on the 10th of October, consisting of different keynote speeches presented by prominent industry leaders in blockchain and smart technologies, and panel discussions between experts about the current and future state of blockchain innovations and their relationship with the public sector.

Do not miss the dialogue about the future of technology at the Bratislava Castle on the 10th of October. Mark on your calendar and get your tickets at https://blockwalks.com/2019/

BLOCKWALKS 2019 is the source of this content. Virtual currency is not legal tender, is not backed by the government, and accounts and value balances are not subject to consumer protections. This press release is for informational purposes only. The information does not constitute investment advice or an offer to invest.