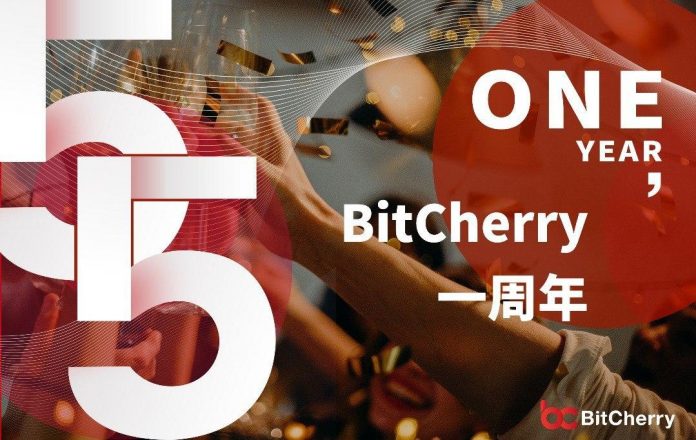 On May 5th 2020, distributed business blockchain project BitCherry will have 1st anniversary celebration, and on the same day will release a new version of its White Paper named by “BitCherry-the world’s first commercial scalable blockchain infrastructure based on IPV8 technology White Paper v2.0.1”, it is another major technology update made by BitCherry in the field of electronic business distribution. In the past year, the entire development process of BitCherry’s work can be described in one word as “create”. For ordinary people, “create” the word, is only one active or passive sensory behavior, but to blockchain practitioners the word “create” represents the destruction of conservatism, and also a process of figuring out the “unknown”, and it also carries the spiritual transformation from “unreal” to “real”.

The blockchain industry is a blockbuster, so it has to survive in the troughs, but the big waves will eventually seek sand, and the market will definitely choose a project that combines technology, commerce, and ecological improvement. With the improvement of cognition, it is only a matter of time before high-quality blockchain projects will receive more attention. In the past year, fans from more than 40 countries around the world gave BitCherry a full range of support, which helps us continue to expand the development of our industry. Currently, the number of BitCherry lovers has exceeded 1million, and BitCherry’s business philosophy is welcomed in more than 10 countries worldwide, including China, the United States, Dubai, Turkey, Indonesia, and Vietnam and so on. BitCherry signed a strategic cooperation agreement with the four countries, so together we will create a global “blockchain +” economic environment.

On May 5th 2020, BitCherry technical team released “BitCherry- the world’s first commercial scalable blockchain infrastructure based on IPV8 technology White Paper v2.0.1”, with the upgraded version. In this upgrade, BitCherry combines years of engineering experience in the Internet, proposed Blockchain Plus concept. Also the team intended to perform by technical means of improving the current public chain expansion, which is poor, and has inadequate performance, irrational governance structure, low security issues aspects. BitCherry build everything up from the structural design of the public chain, network protocols and consensus governance programs, proposed a new program – the application of new IP technology.

Let’s first understand what IP is? As we all know, the current widely used protocol cluster on the global Internet is the TCP / IP protocol cluster, and IP is the protocol of the network layer in the protocol cluster which is involved in the core protocol. The IP protocol also has a version number, the version number of IPv4 is 4, and IPv4 is the first widely used protocol that forms the basement of today’s Internet technology. After decades of development, the global Internet became quite mature, so the global IPv4 addresses are about to be done. And because the TCP / IP protocol is the lowest-level Internet protocol, this set of protocols relies on the user’s IP address for computer interconnection. The user’s IP address is managed by the home directory. The server that manages the home directory is called the root server, and the main root server was established in the United States, such a network pattern makes countries without root servers have a huge hidden danger in network security.

BitCherry had an innovative thought on building a P2Plus physical layer protocol, so it proposed IPv8 technology. This technology can be used in the smart home, smart cars, smart healthcare, smart things in quantity and intelligent agriculture. It is also compatible with the IPv4 technology ecosystem, without the need for technicians to learn new protocols. At the network protocol level, the advantages of IPv8 are more obvious. All existing public-chain P2P protocols work above the TCP transport layer of the host side of the IPv4 / IPv6 wide area network, while the P2Plus protocol in IPv8 works at a lower level. Within the IP network layer and data link layer (which can work on both the host and router), because it works on a lower layer and closer to the protocol layer of the hardware device, P2Plus in IPv8 can easily penetrate any network, firewall and network fence.

BitCherry believes that token holders entitled to participate in the development of the project and work on chain management; therefore BitCherry made a combination in a data structure on the basis of a hash, blockchain pioneered the technology and theory of six degrees of social. The combination creates a unique aBFT + PoUc consensus. All users can participate in the PoUc consensus. The algorithm automatically selects adjacent nodes and non-adjacent nodes according to the relationship graph, and performs virtual voting with reference to their weights. The selected nodes will receive bookkeeping rewards to ensure the rationality of the governance structure, strengthen supervision, and greatly increase user’s  trustworthy.

In order to balance the relationship between traditional business and innovative technology, BitCherry paid attention to all the needs of business, so it continuously expands the business application scenarios, therefore to create more convenient and easy use of blockchain infrastructure. It also provide efficient and convenient blockchain technology solutions. In the past year, BitCherry’s business cooperation involved in supply chain finance, e-commerce, and energy infrastructure companies. In addition to the commercial field and technology, community can be the key node to verify project, and BitCherry attaches great importance to community ecology building. Apart from building the value of community, we also released global community ambassador recruitment, developer community building program for BitCherry fans to understand everything easily through different dimensions.

BitCherry project leader has said: ‘distributed business does not mean rebuild commercial society, but the digitalization of business community.’ There are much more differences between distributed economy and traditional economy, the most important of which is that ecology will start to play a greater role. BitCherry’s aim is to create an open business ecosystem using node operations around the world to participate in value creation and shift the value network. In this ecology, we will coordinate the different interests of countries, communities, developers and other roles to keep healthy operation of the ecology.