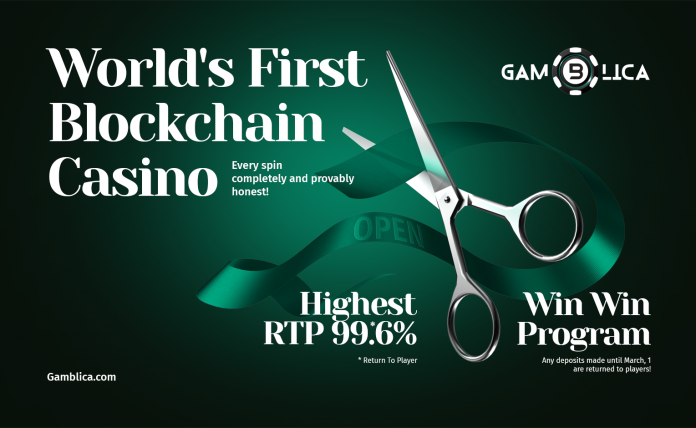 Year 2017 gave us an insane crypto boom combined with more linear but still quite impressive gambling market growth. Two of those things combined gave us Gamblica. It’s a blockchain powered startup, which aims to bring the best from crypto world to gambling.

Gamblica token sale ended in September, 2018. The team has successfully completed ICO, reaching the project’s softcap. 723,925,462 GMBC (Gamblica token) were sold, with a whopping $7 million collected. And just recently Gamblica launched an alpha-version of its gaming platform and let the community try their product in early access mode.

While at the moment only slot machine module of their platform is available, folks from Gamblica want to tokenize the entire industry, including but not limited to online poker, sports betting, and blackjack. The main thing Gamblica strives to achieve provides is total transparency guaranteed by blockchain technology. The company founders, with an extensive gambling management experience claim that customers are fed up with unfair companies and their everlasting payment delays, account blockings and hidden manipulations that make it difficult to play and enjoy the game. “Casino owners, especially in grey and black markets answer to no one basically and act accordingly. We think that players are beginning to realise that. Whoever manages to satisfy this demand for honesty and transparency better will change the game forever and get rich in process”.

Along with an alpha version of platform, Win-Win program was also launched, which will last until March 2019. Players will get back their deposits plus everything they won. It might seem silly to refund player’s losses, but it is quite smart actually. A casino cannot operate without a licence. Not allowing people to lose, while still collecting real product testing data and fixing bugs is a nice workaround.

To maximize their market edge gentlemen from Gamblica also keep their RTP (return to player) ratio at 99.6%, which is higher than any slot machine in the world. RTP is simple. You place 100 bets, 1$ each. With an RTP of 90% you will win about 90$ back. Highest RTP ratios on the market before were: Mega Joker – 99,00%, Cosmic Quest – 98,95% and Jackpot 6000 – 98,86%. To alleviate any doubt the entire math model was released to public and can be easily audited by anyone.

To start playing at Gamblica you’ll need to get GMBC tokens that serve as a fuel for the platform’ ecosystem. It is already listed at Tidex and BiteBTC exchanges where it can be bought anytime and now it is on its way to the Coinmarketcap. The interesting thing is that technically Gamblica’s founders didn’t need their own token. They could use any of the existing ones. It was a conscious decision aimed to basically connect the company’s capitalization with the demand for their products, thus providing more transparency.

When asked about future plans Gamblica management seems eager. By the time Win Win ends and they get their license ten to twenty more new slots will be launched.

Next comes poker. Developers are currently working on poker room update that will unite all the poker players from the whole world in one place. Poker RNG (random number generator) will also be powered by smart contracts and blockchain, which will make the game free from unfair play, cheating and results’ falsification. The proven technology will make impossible to influence probability of hitting certain cards from the deck. This is the main advantage for any player to try his own luck in poker without any intermediaries.

One of the further Gamblica’ plans is to launch online sports betting platform. Nowadays it is one of the fastest growing markets online. According to the official statistics, 67% of the total number of bets in the world are placed using personal computers, tablets and smartphones. Every year the number of people moving from offline to online betting is increasing in significant rates. By 2025 it is forecasted, that more than 80% of bets will be placed online. However, there is still no decision for secure and reliable way for betting. Therefore, Gamblica aims to crack the market open with its own platform.

Gamblica invites new players to join the gambling revolution and to start making a better future for players now!