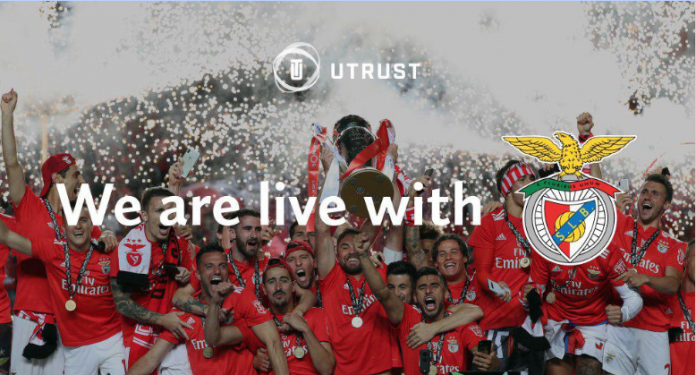 June 2019, Lisbon, Portugal – Leading Cryptocurrency payment solution UTRUSThave announced a partnership with S.L Benfica. The deal will see the Portuguese football champions become the first major European football club to accept cryptocurrency as a payment method. Benfica supporters now have the option to use cryptocurrency to purchase match tickets and the full range of merchandise through the Benfica online store.

Visit the official Benfica online store today, where all partners get 10% off, with the discount code ‘UTRUST’.

With more than 14 million supporters worldwide, and a digital fan base that exceeds 7 million followers across social media platforms, S.L. Benfica is one of the world’s most passionately-supported football clubs who recently reclaimed the Primeira Liga title for a record 37th time, underpinning their status as the most decorated club in Portugal.

The launch of UTRUST as a cryptocurrency payment solution partner to Benfica will evolve the club’s e-commerce strategy and expand its global audience, in particular it will bring the tech savvy and cryptocurrency holders in Portugal and abroad closer to its home ground of the Estádio da Luz.

UTRUST has modernized the finance and payments industry by providing instant crypto-to-fiat conversions. This partnership achieves that aim by granting Benfica access to a wider customer base and offering a significantly enhanced online experience through the implementation of novel technologies. S.L. Benfica CEO, Domingos Soares de Oliveiravoiced his excitement about the new partnership, stating:

“This is an exciting day in the history of S.L. Benfica as we announce our decision to accept cryptocurrency payments. Our benfiquistas make Benfica the unique and special club it is and we recognise that many of our supporters are now digital users first so we want to be ahead of the curve when it comes to adopting novel technologies and giving our supporters the best online experience. We are very excited about the possibilities that this partnership with UTRUST presents in the evolution of our e-commerce strategy and we look forward to accepting our first cryptocurrency payment.”

The core of UTRUST’s technology will allow Benfica to take advantage of the increased security and convenience of cryptocurrency payments whilst protecting the club from market volatility.  It will also significantly reduce processing fees and eliminate inconvenient credit-card chargebacks and fraudulent payments. Most importantly, Benfica will be able to settle payments directly to its bank in fiat on the very same day they are received.

For supporters, paying with cryptocurrency is cheaper, safer and faster than any other online payment method. With the UTRUST platform, users can pay using the native UTRUST token (UTK) in addition to popular cryptocurrencies like Bitcoin and Ethereum.

The official Benfica online store has already begun accepting cryptocurrency, and supporters can purchase tickets, clothing and a host of other merchandise via Benfica’s desktop website, mobile or dedicated app. UTRUST Co-Founder and CEO, Nuno Correia commented on the partnership, stating;

“This partnership with Portugal’s number one football club marks a major milestone for UTRUST and the blockchain ecosystem as a whole. Benfica is one of the biggest sporting clubs worldwide and we are delighted to be making cryptocurrency payments possible for their 14 million supporters around the world.”

SL Benfica CEO, Domingos Soares de Oliveira, and UTRUST Co-Founder and CEO, Nuno Correia are available for a joint interview. UTRUST have also released a video announcement that you can watch here.

UTRUST is the leading cryptocurrency payment solution designed to modernize the finance and payments industry and solve the problems of traditional payment methods by offering instant transactions, buyer protection, and immediate crypto-to-cash settlements for the merchant. The Swiss-based startup was recently granted SRO approval to operate as a ‘financial intermediary’ under VQF, the self-regulatory organization approved by Switzerland’s independent financial-markets regulator, FINMA.

Sport Lisboa e Benfica, commonly known as Benfica, is a sports club based in Lisbon, Portugal. It is best known for the professional football team playing in the Primeira Liga, the top flight of the Portuguese football league system, where they are the current champions and the most successful club in terms of titles won.

Visit the official Benfica store today to get your merchandise.

UTRUST is the source of this content. Virtual currency is not legal tender, is not backed by the government, and accounts and value balances are not subject to consumer protections. This press release is for informational purposes only. The information does not constitute investment advice or an offer to invest.