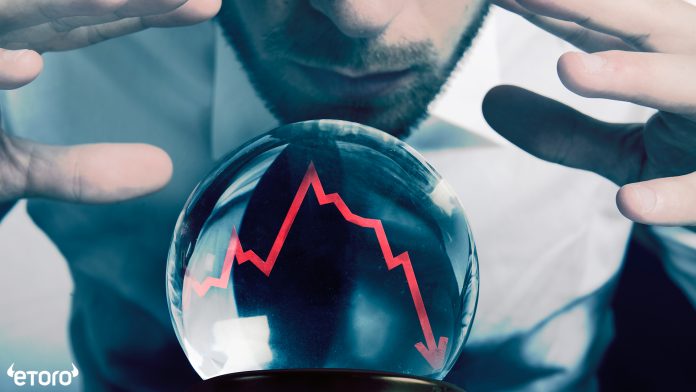 Things are pretty rough for the global financial markets at the moment. So much so that economists are speculating that we’re about to go into a recession. Recession affects all of us, but for those that hold Bitcoin or other cryptocurrencies, things might feel a little more uncertain. Why? Well, we haven’t really seen a global recession since the rise of cryptocurrencies. With that being said, the invention of Bitcoin was in a sense a response to the global financial crisis in 2008. Satoshi Nakamoto himself cited bank bailouts and centralized financial institutions as reasons for the creation of Bitcoin. So, what would happen to Bitcoin if the world had to go into recession? We have some ideas.

What Exactly Is A Recession?

I’m sure we all remember the global financial crisis that occurred in 2008, but what exactly is a recession and what causes it?

There are so many different factors that can cause a recession: political instability, climate change, war – the list goes on. However, a recession is recognized as a period of temporary economic decline (the key word here is “temporary”), categorized by a fall in GDP in two successive quarters. Recessions are terrible for the global economy, and hit us all hard.

How Will Bitcoin Be Affected By A Recession?

When it comes to how Bitcoin will be affected by a recession, there are really two possible scenarios: Either Bitcoin thrives or it takes an incredibly hard hit – what will actually happen remains to be seen.

The case for a thriving Bitcoin market during a recession: Underperforming fiat financial markets could fuel Bitcoin adoption.

In countries with high inflation, such as Venezuela and Zimbabwe, Bitcoin (BTC) is trading at a premium of 40%. High inflation rates make fiat investments less valuable and less stable, driving investors away. While Bitcoin is influenced by global markets to some degree, it has been called the “digital gold standard” making it a safer investment financially, and more secure. Bitcoin is also recognized worldwide, and relies on no external, single authority.

Inflation will naturally rise during a global recession, making investing in traditional fiat investments both more expensive and less stable. This could very well work in Bitcoin’s favor, as more people will consider moving their investments into cryptocurrency.

On the other hand a recession may cause the USD to reemerge as a global currency, rather than crypto. During a recession, the 99% are forced to cut spending, and focus on survival – job cuts and pay cuts make things even more difficult, and most working to middle class people will need their fiat currency to survive rather than purchase Bitcoin and other cryptocurrencies. You could even see people who hold massive quantities of Bitcoin (BTC) suddenly offloading, weakening the value of BTC and driving down demand.

What Would Happen To Bitcoin If The World Had To Go Into Recession?

So, what would happen to Bitcoin if the world had to go into recession? There really are two equally possible options to be discussed here. Either Bitcoin (BTC) thrives as the new gold standard during a recession or the USD emerges as the global currency and Bitcoin takes a massive hit.

Bitcoin (BTC) was invented to combat so many of the issues that we face with the current fiat financial system, but we’re still very much in the early stages of Bitcoin adoption (even if it doesn’t feel that way) so we can’t be sure how it will respond to a global recession. Whatever the case, Bitcoin still has a long journey ahead of it.

If you’re on the bullish side of the Bitcoin recession debate, or just interested in trading crypto, you can do so securely on eToro. You can take advantage of the social aspect of the platform by learning the ropes and connecting with like-minded traders.

Cryptoassets are volatile instruments which can fluctuate widely in a very short timeframe and therefore are not appropriate for all investors. Other than via CFDs, trading cryptoassets is unregulated and therefore is not supervised by any EU regulatory framework. Your capital is at risk.