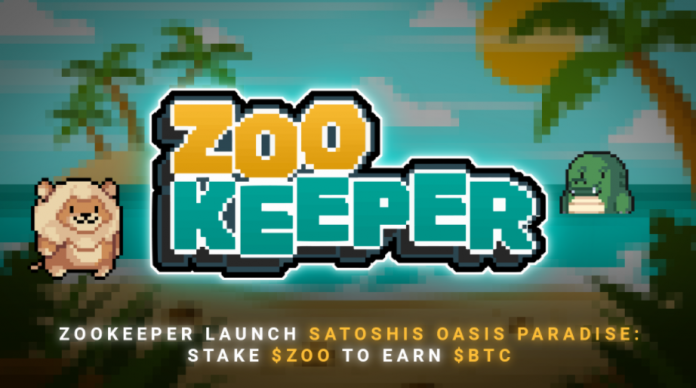 17th August 2021, GENEVA, Switzerland — Built on Wanchain, the Yield farming platform ZooKeeper has announced the launch of its new staking pool, Satoshi’s Oasis Paradise. The staking pool now offers its users BTC rewards instead of XRP rewards following a vote by the community. The new pool began on the 13th of August and will continue for exactly four weeks.

Satoshi’s Oasis Paradise is the latest addition to the ZooKeeper platform. Following a vote by the ZooKeeper community, all users will now have the opportunity to stake their $ZOO tokens to earn the wrapped $BTC (known as wanBTC on Wanchain) as rewards for the month. Rewards can be claimed at any time, there is no risk of impermanent loss, no penalties for entering or exiting the pool, and there are no limits on staking amounts.

The ZooKeeper Safari Pool enables users to stake $ZOO and earn rewards. Launched on the 21st of May the exciting new concept is taking off amongst the ZooKeeper community. The Safari Pool will even further benefit the users who have been focused on keeping their ZOO tokens from the beginning and reward them for their patience. The Zoo staking pools both give the Zoo token greater utility and at the same time they help boost ZooKeeper TVL (Total Value Locked). The Safari Pool process has a number of great benefits to all perspective ZOO stakers, including:

This pool is a permanent part of the Safari Pool section and will enable the user to stake their ZOO to earn the current community-voted token/coin.

The ZooKeeper voting process means that while a chosen staking pool is active, the community will be voting for the next pool. Thereafter, a new vote will always be started the same day as the pool launch. For each new community vote, various coins/tokens listed on WanSwap will be available to choose from.

Earlier this month ZooKeeper launched ZooRena, an exciting, unique, interactive battle game in which two opposing clans from different ZooKeeper mascots will battle once a week. ZooRena participants can choose a clan to support, add power to that clan using NFTs to boost the chance of victory. ZooRena is made even more interesting with the addition of betting on battles, which means the growing dApp offers numerous different ways in which to earn.

Anyone interested can participate in the Safari adventure and earn some wanBTC, which can easily be converted to native BTC using Wanchain’s decentralized technology with minimal fees.

ZooKeeper.finance is the source of this content. This Press Release is for informational purposes only. The information does not constitute investment advice or an offer to invest.