At press time, the father of crypto is trading for about $3,418 and has remained relatively stable over the past seven days. Granted the price isn’t at all near where we’d like it to be, it’s a relief to see that volatility has taken a rest (albeit brief) from attacking bitcoin.

Unfortunately, it’s virtually impossible to say if this “good fortune” will last. Many analysts are claiming that a test of $3,000 is still in play, and the currency could potentially find itself trading at this level or even lower. 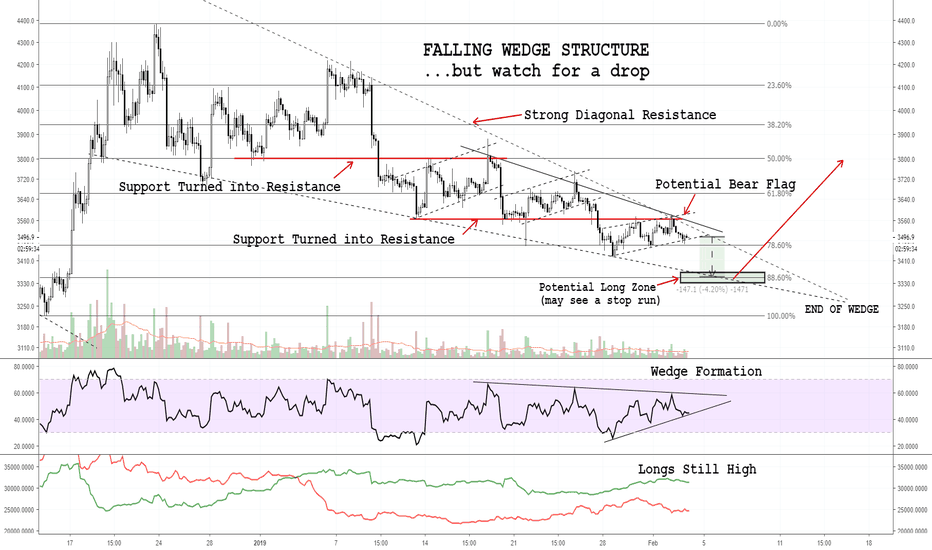 One such figure is David Thomas, director and co-founder of the crypto brokerage firm Global Block. In a recent interview, Thomas claimed:

“February begins and the past week in crypto has been comparatively dull by the standards that we have become accustomed to, and for the most part, caution and negativity still prevail. The last week saw a light-trading range for BTC between $3,400 and $3,523. Overall sentiment, as mentioned above, still appears to be bearish and the $3,000 support level muted last week remains in play with further support at $2,600. If we were to see a squeeze higher, then resistance still stands at $4,000.”

The worry that bitcoin could drop into the $2,000 range is likely to always remain in the back of enthusiasts’ heads. Granted the push beyond $4,000 never comes, most traders are always probably going to exhibit fear that bitcoin may fall even further than it already has.

At the same time, gloom and doom has been running rampant since December, and for the most part, bitcoin has always sustained its position on the financial totem pole. To be fair, there’s one thing we can all say about bitcoin, and that’s that it can move in any direction at any time. We’ve grown accustomed to this, especially over the last two years, but recently, even under the most bearish conditions, bitcoin has managed to keep itself steady.

Furthermore, one must always be willing to look beyond the notion of price at developments occurring in the bitcoin space, and despite the falling price, such developments are always present. Among the most notable is Bitfury’s announcement that it is opening bitcoin mining operations in Paraguay. Partnering with the South Korean venture Commons Foundation, the move is part of Bitfury’s new Golden Goose initiative to bring cryptocurrency to Spanish-speaking countries.

Sandra Otazu Vera – an attorney in Paraguay and advisor to the Commons Foundation – states:

“Paraguay is exploring creative ways to use emerging technologies, like blockchain and cryptocurrencies, to benefit its economy and its citizens, and this partnership with strategic allies like Commons Foundation and Bitfury will provide the infrastructure that enables them to advance those efforts.”