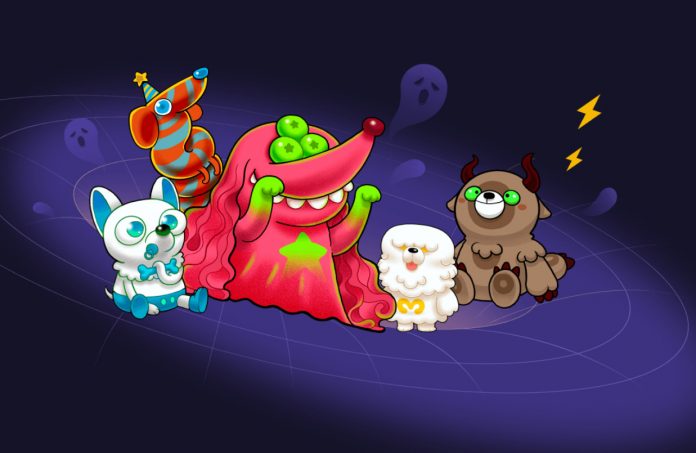 Radio Caca (RACA) has announced updates to its play-to-earn game, Metamon. Several updates introduce many new game mechanics. Players will be able to form their squads and participate in group battles and other unique features such as training and earning achievements.

At the Hall of Valhalla, Valhalla points can be used to redeem exclusive rewards that are not obtainable from Metamon Eggs, such as R building materials, NFTs, and priority 2DMM advantages.

The Health Index (HI) is a new mechanism in Lost World. HI is capped at 100. A metamon loses 1 HI for every five failed attacks. While a metamon’s HI is 0, the metamon will become inactive and unable to join any battle. HI can be restored using the Anti-Fatigue potion, which is obtainable from points redemption in the Metamon Kingdom or created by mixing green potions.

Battle Flags allow players to form a squad in the Metamon Kingdom. As symbols of heritage and honor, Battle Flags are a medium where victories and losses are recorded. In addition, Battle Flags are required for the ladder. The total ranking prize pool for Q2 is tentatively set to be 4 billion u-RACA (or an equivalent value). The official set of rules will be announced simultaneously with the launch of the new Metamon Kingdom.

After the Valhalla Points redemption is live, green potions will no longer work on metamon, whose scores are higher than 380.

There are new types of potions to be introduced in the game.

Stimulant: Stimulants can temporarily boost metamon attributes in the Metamon Kingdom. An N stimulant gives a 10% attribute boost, an R 20%, and an SR 30%. They last for seven days, which is the entire duration of a battle. A metamon can only use one stimulant per battle.

Currently, the Metamon Kingdom is in its promotional period. As a benefit of being early adopters, players do not pay any fee to play.

After the new self-organized team patch goes live, the game will start charging fees. The fees are on a per-metamon and per-battle (7 days) basis:

We are now collecting Battle Flag designs from the community. To be accepted, the submitted designs must meet the following specifications:

Players will be able to redeem their Valhalla Points for various reward items:

Space Ticket: 20 Valhalla Points. Limited to 1,000 tickets per day. A metamon can consume one Space Ticket to teleport back to Metamon Island to earn eggs. However, when the EXP value increases to 395 (total EXP for Lv60), players need to use a green potion to reset to 0 to battle.

Space Tickets are tradable. The quota refreshes at UTC 00:00.

Purple Potion: 4 Valhalla Points. A player’s quota of the purple potion redemption is the same as the number of his level 60 metamons. The quota refreshes at UTC 00:00 and does not roll over.

Hall of Valhalla Auction: Occasionally, there will be a pop-up Hall of Valhalla auction where players have the opportunity to trade their Valhalla Points for seasonal high rarity items through auctions.