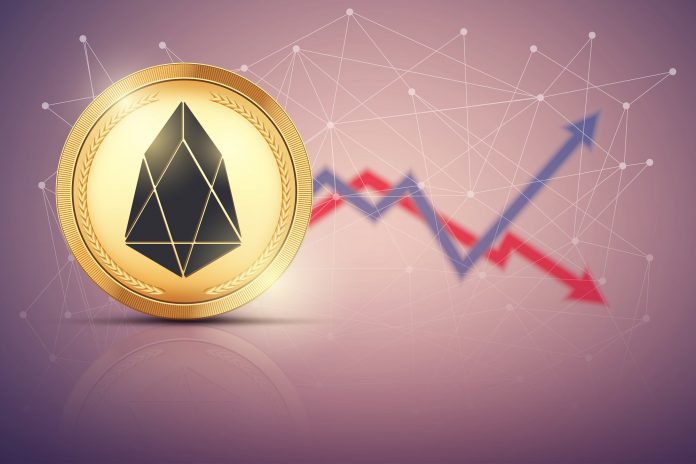 Predicting the future market momentum of any cryptocurrency isn’t an exact science. Technical analysis is helpful, although these markets can always turn around on a dime. When it comes to looking at the future EOS price from a short-term perspective, it would appear there is a rather bearish outlook.

Every time a triangle pattern forms on any cryptocurrency chart, there is some reason to be rather wary of what the future may hold. In the case of the chart outlined by Repuzel, it would appear the coming few days will be crucial for EOS. The triangle will be broken, albeit the direction in which it will happen is still unclear right now.

Although this user would expect a potential break upward to $3.912, it will be slightly difficult to achieve such a lofty goal. A drop to $1.886 seems far more likely under the current market conditions. Unfortunately, that latter result would only further confirm the bearish market sentiment is far from over at this stage.

As stated earlier, there is a very bearish outlook on the short-term EOS price right now, for some unknown reason. Trader Dee718 is convinced the EOS/USD ratio will continue to deteriorate and drop below $2 in the next few weeks. The first leg down will drive the price to $2.018, after which a temporary bounce to $2.7 might occur.

Once that level is reached, the real bearish pressure will begin for EOS. Dee718 expects the EOS value to drop from $2.7 all the way to $1.55 and potentially lower by February. That is not a pleasant outlook by any means, albeit it is also a scenario no one can dismiss at this time.

A Brief Window for Lucrative Shorting

In the world of cryptocurrency, making money is the primary objective for a lot of traders and speculators. Rather than buying cryptocurrency directly, going long or short on Bitcoin and altcoins is equally profitable. According to DChemist, a lucrative opportunity to temporarily short EOS will materialize fairly soon. It is not the message EOS enthusiasts want to hear, but it appears to be a realistic outlook.

In fact, this user predicts a very viable short-term EOS price target, even though it is well lower than the current price. An imminent drop to $1.789 is certainly within the realm of possibilities under these market conditions. It is a level which was reached several weeks ago as well, thus history may very well repeat itself in that regard.