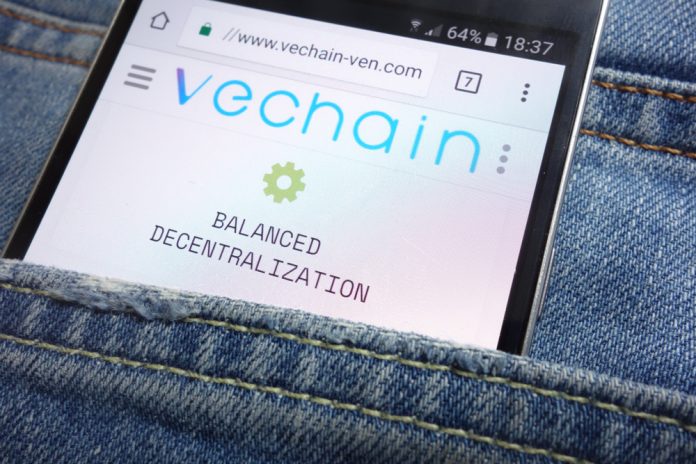 When the momentum turns bullish in the cryptocurrency, it is rather obvious. With most top markets noting a gain of 5% or less, it would appear VeChain is doing things very differently. So much even that the VeChain price currently notes a 16% gain across the board, although there is no real reason for such a sudden outbreak This also makes one wonder if the momentum can be sustained for more than a few hours.

It is quite evident a lot of cryptocurrencies, tokens, and assets have waited for a Bitcoin uptrend to materialize. As most of these markets directly derive value from the world’s leading cryptocurrency, it is only normal those markets turn bullish when Bitcoin does. VeChain is no exception in this regard, although it remains to be seen if the market isn’t getting ahead of itself right now. After all, this steep growth should result in a retrace at some point.

Over the past few hours, the VeChain price has risen by 16% across the board. This brings the US Dollar value back to $0.005271, whereas the BTC value hit 135 Satoshi once again. It is a very promising sign all across the board, although one has to keep in mind such steep and sudden growth can also be problematic. Combined with the relatively low trading volume, all of this excitement could peter out pretty quickly.

On social media, there is still a lot of excitement and hype regarding the upcoming VeChain Summit of 2019. So far, no one really knows if any major announcement will be made. If there is one, it remains uncertain what it could possibly be about at this time. There is always the chance of not seeing any major announcements during this event, although that would certainly be quite disappointing to a lot of investors.

There are also traders who are inclined to cash out the current profits, which is only normal. Following such a steep increase, not cashing out these profits would be a lot more worrisome. Ashish Thadani is trying to chase a potential XLM pump, although it remains to be seen if this is the last leg of VET’s run. Keeping all of this information in mind, things will undoubtedly get interesting over the coming hours.

Trade Opinion: Take profits from #Vechain and move to #XLM for the big announcement ? @MatiGreenspan

The actual VET price chart doesn’t look overly promising, although it is not all that bad either. With this most recent leg up in place, it would appear the double bottom will remain in effect for a little while longer. There is also the breakout of the triangle, which can be interpreted as a major bullish sign. Even so, these volatile markets are nearly impossible to predict under the best of circumstances.

– VET has been making Higher Lows ever since it double bottomed from the base of this channel, effectively forming an Ascending Triangle

– Most recently, VET has broken out of the triangle $BTC pic.twitter.com/dXssVYQO6s

For the time being, traders would be wise to consider cashing out some profits before the momentum sours. If history has shown anything, it is how no uptrend will be supported for very long, especially in the cryptocurrency industry. As such, it will be interesting to see if VeChain can remain above $0.005 throughout the day. A push to $0.0055 isn’t impossible either, but it might be a lot more complicated than traders would assume.