Online gaming is among the most popular and prominent activities that people do online. The growth for this online industry has been on the rise in recent years. In fact, this growth seems to have been accumulating exponentially.

According to studies, all the global crises and disasters only seem to push more people toward online gaming. For instance, during the recent and ongoing Covid19 pandemic, even though there has been a universal economic decline, the online gaming has only grown even more.

This fact indicates that no matter how hard the economy, especially the middle class and lower middle class are hit, unlike most industries, online gaming industry will grow.

In the picture below, you can see the full list of the online gaming industry growth year by year. 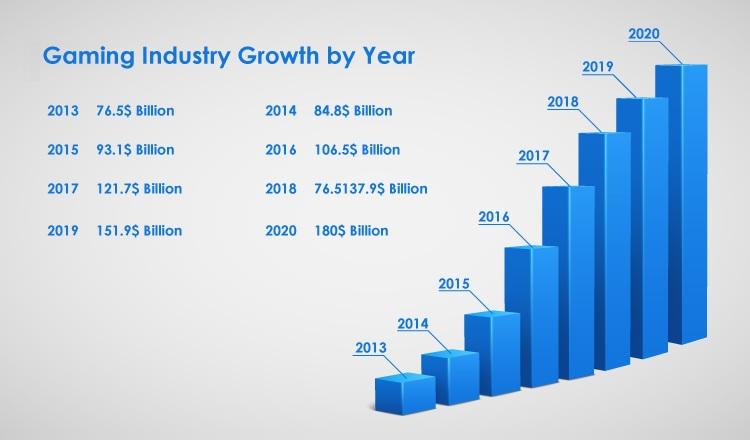 Additionally, mobile phones have become so prevalent in the past decade that you can hardly see anyone who doesn’t have a cellphone.

It is estimated that in 2021, the number of people who play online games will rise to around 2.8 billion.

This unbelievably huge number of people and an almost 200$ billion industry could only mean one thing; revenue.

Countries that have invested in online gaming industry are now gaining the revenues. At the top of the list is China with an annual revenue of about 32 billion dollars, followed by United States with a revenue around 25 billion dollars.

The top 10 countries according to gaming revenue are as follows. 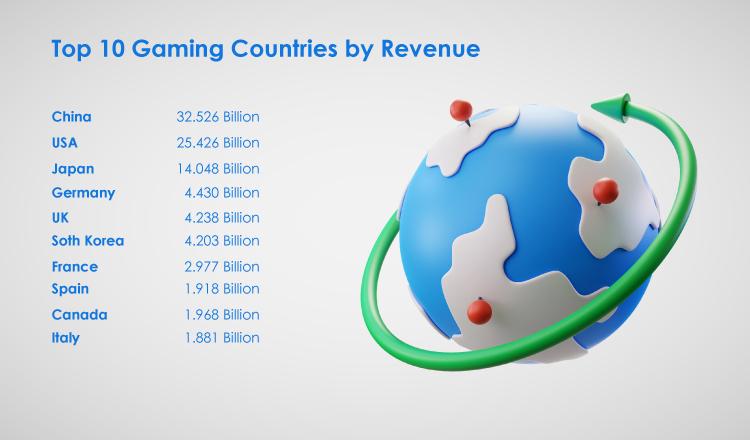 The Issues of Online Gaming Industry

As the industry has turned into one of the biggest across the world, reeling in hundreds of billions of dollars in revenue and billions in players, its issues have also grown.

Online gaming analysts consider lack of privacy, decentralization, and efficiency to be among these issues. What’s the solution? Of course, Blockchain technology.

But, in what form and type? Enter Xbit.

Xbit is a cryptocurrency that has been developed for the online casino Xbit. This online casino has all the official and necessary permits and license. Casino Xbit is operated by Bit Gaming LLC, which is registered in The St. Vincent and the Grenadines.

Xbit, with the exclusive code coin of XBT, is a coin that has been developed based on the SHA-256 algorithm, which is the same algorithm that has been used in the development of another major cryptocurrency; Bitcoin.

Xbit coins offer many values and benefits for the owners and players. Users can use Xbit to play games and make deposits at the online Xbit casino, and also, they can use this coin as a financial tool to transfer money.

As was mentioned, Xbit has been developed to be used in online gaming, and specifically for the online Casino Xbit. In this way, Xbit coins are considered to be representative of revenue shares of casino Xbit.

Players and anyone who has these coins will receive benefit and interest from the casino, through the coins as representatives of revenue shares. Xbit is a coin that creates wealth and value through generation of wealth.

By staking Xbit coins, users can receive an annual return of 5 percent, which is regarded to be quite a considerable return in international scales.

In this method the coins are frozen and are not transferable. For each year of staking, 5% return is given to the owners.

With the staking of coins, their distribution at exchanges will decrease. As a result the price of coins will increase. So this is another way in which owners and coin holders will benefit from the staking process of the Xbit coins.

Blockchain Is the Future of Gaming

The Blockchain technology is one of the most comprehensive technologies developed to date. It can be used in various sectors, such as finances, banking, health care, land registry, transportation, and of course, gaming.

Blockchain can bring levels of transparency, privacy, security, efficiency, and decentralization to the gaming industry like never before.

Xbit Coin is a cryptocurrency with an independent Blockchain network that can bring all of those advantages for players.