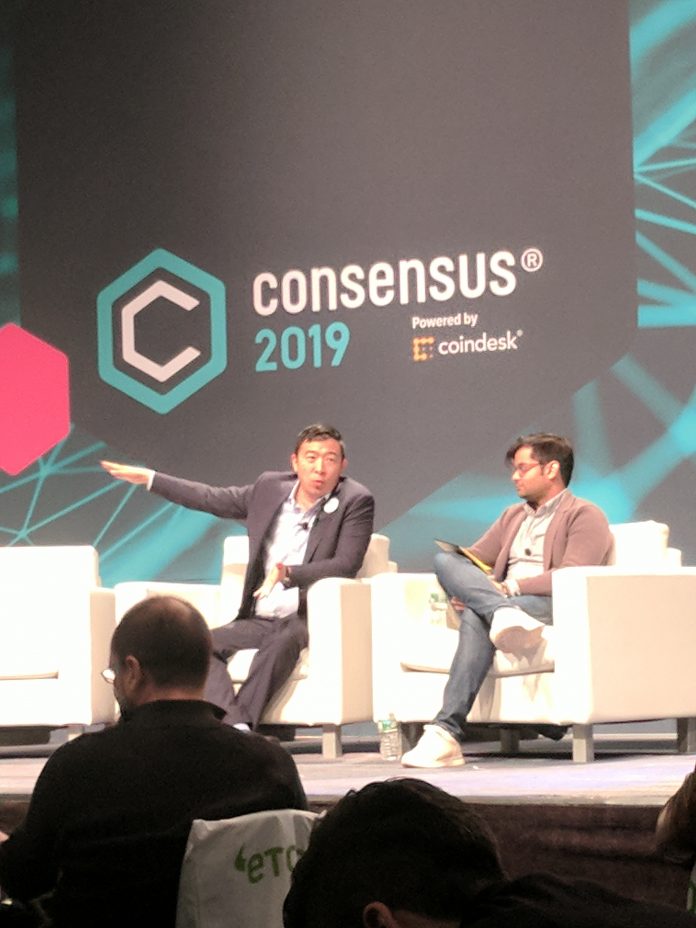 On the last day of Consensus 2019, Democratic nominee for the US 2020 presidential election Andrew Yang sat down for a chat with Coin Center’s Neeraj Agrawal to talk politics and crypto. The two shared a candid conversation on the main stage in front of the crowd of industry players that made up the conference.

Andrew Yang entered the Democratic primary as a long-shot, but has picked up a lot of steam throughout the internet through his “Yang Gang” supporters. Onlookers suggest that the internet supporters have ‘memed’ Yang to the forefront of the campaign cycle by spreading memes and music relaying the message of “$1k per month”, the essence of Yang’s primary platform of universal basic income (UBI).

While a concept like UBI might be a hard sell to a group like the crypto community, Yang explained that it’s not all that unfathomable. He points to the yearly stipend in Alaska of US$2-3,000 per year, funded by oil production. Yang suggests that data is the new oil, and with a small Value-Added Tax (VAT) on companies like Amazon and Facebook, the government could fund every citizen with $1,000 every month, no strings attached. He believes that this UBI would alleviate poverty and build a more educated and entrepreneurial society.

Yang also suggests that his candidacy goes beyond UBI. He claims to embody a solution to everything wrong with America, including President Trump. “The opposite of Trump is an Asian man who loves math,” Yang joked. The “MATH” abbreviation on some of his campaign gear is also a play on Trump’s MAGA; it stands for “Make America Think Harder”. Yang embodies a candidate focused on science and an educated, productive population.

Still, his platform doesn’t necessarily explain why he is the “pro-crypto” candidate. Yang is certainly knowledgeable about crypto, and by some stretch of the word, might even qualify as an early adopter- his first Tweet about Bitcoin dates back to five years prior. Yang has a lot of respect for cryptocurrency and blockchain tech and recognizes the role it will play in the future:

“I believe that blockchain will play a big role in the future… we need to make an environment which supports that.”

And for skeptics who might be concerned that Yang was simply pandering to his audience: fear not, Yang has put his money where his mouth is. His campaign already accepts Bitcoin and ERC-20 token donations at yang2020.com/crypto.

Much unlike many of his counterparts, Yang had no issue making bold statements regarding crypto. He joked that he’ll “say something really smart” to pump the markets, then everyone can sell and he’ll say something dumb to dump it for everyone to buy back in. “It’s not collusion because I’m saying this in public,” he added. Him and Agrawal also fantasized about a Yang presidency. Yang suggested that “Yang Gang in the White House” would probably make Bitcoin moon.

While it’s all light-hearted conversation at present, there are some interesting undertones behind Yang’s candidacy for the crypto space. Regulation is undeniably important for crypto, and an unmistakenly pro-crypto president in the United States has massive implications.

Yang joked about coming to Consensus to find wealthier donors- but a campaign funded by the crypto space might not be so out of the question. The Dogecoin community has crowdfunded a NASCAR driver and Olympian bobsled team years ago, and it could be possible for the space as a whole to raise millions to give Yang a leading shot at the White House. Yang did mention a cryptocurrency for his campaign, ” We were looking at a Yang Coin for a while… it’s not too late!” Alternatively, others have begun to suggest the sale of Non-Fungible Token (NFT) collectibles in the campaign store alongside the hats and t-shirts.

As the election cycle really picks up the end of this year and start of next, it will be interesting to see how much the cryptocurrency space will contribute in support of the Yang Gang.