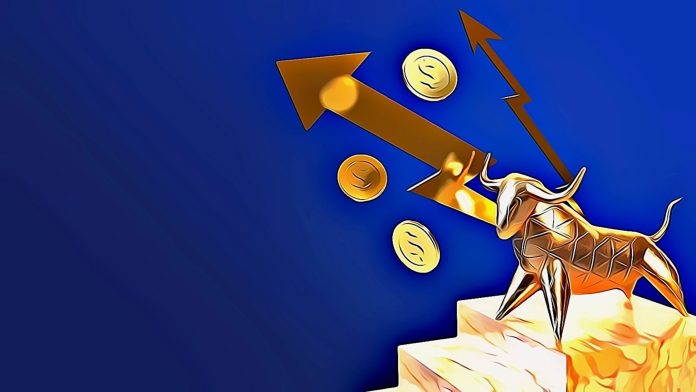 The worldwide stock market movement, which was very optimistic last week, continues to be the basis on which bitcoin trades. The NASDAQ is up 4.72%, the S&P 500 is up 61 points, and the Dow Jones is up almost 350 points over the last five days, indicating optimistic momentum for global markets.

Given that the world’s stock markets rose last week, it is not surprising that Bitcoin’s price has increased significantly in the previous seven days by over 13%, helping to push the crypto market’s global market cap to heights of over $1 trillion and tip the scales in favor of bulls.

The main event this week is the release of the CPI figures on Tuesday, September 13th, which will lay the groundwork for the Federal Reserve’s monetary action this month to fight inflation.

It remains to be seen whether the Fed’s aggressive monetary policy of rising interest rates during the past few months will result in a net decline in CPI statistics, as evidenced by the positive CPI numbers from last month, which showed a net inflation rate of zero.

Regardless of the conclusion, the Fed will probably continue hiking interest rates this month despite tomorrow’s potentially optimistic data for the stock and cryptocurrency markets.

Two days from now, Ethereum will officially merge, and as its network gets ready for one of the biggest improvements in its history, all eyes will be on the cryptocurrency.

By eliminating the need for wasteful hash mining using ASICS and GPUs, Ethereum’s merger with Ether will convert it to a fully proof-of-stake consensus structure, making it the largest decentralized eco-network. Even though the miners are not pleased with the merge, they will probably switch to Ethereum Classic or disperse their hashing power among the many other EVM-compatible networks currently in operation.

The 24-hour trading volume of Ethereum has increased significantly, rising by more than 26% to $15.8 billion. Furthermore, Ethereum continues to gain value relative to BTC, now having a global market capitalization of $213 billion instead of $426 billion for Bitcoin.

While “The Flippening” is still some time off, post-merge Ether may experience tremendous price growth, pushing it closer to displacing Bitcoin in the coming months.

As anticipation heightens, Google has added a countdown clock for the “ETH Merge,” displaying Current Difficulty, Hashrate, and Merge Difficulty.

The enthusiasm and general usage of cryptocurrencies have dramatically decreased due to this year’s weak market, and Ethereum gas fees have already stabilized. Even reduced gas prices will be possible after the merger, creating a major potential for developers and expanding the chain’s capacity to scale.

Since it is anticipated that ETHUSD will trade above the $2k level in the upcoming weeks and months, now is a great time to build a long-term position.