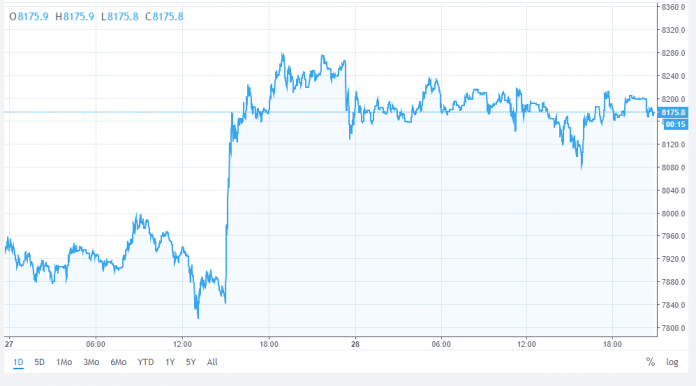 At press time, the father of cryptocurrency is in the high $8,200 range – a bit higher than yesterday. This is a good sign that current support stands strong, and bitcoin is not dropping any lower.

According to one source, however, the currency’s upcoming resistance could potentially put its bull run to a temporary end, though little evidence is given except for a few technical indicators appearing on present charts. Either way, bitcoin is slated to stay between $8,000 and $8,250 in the short-term. 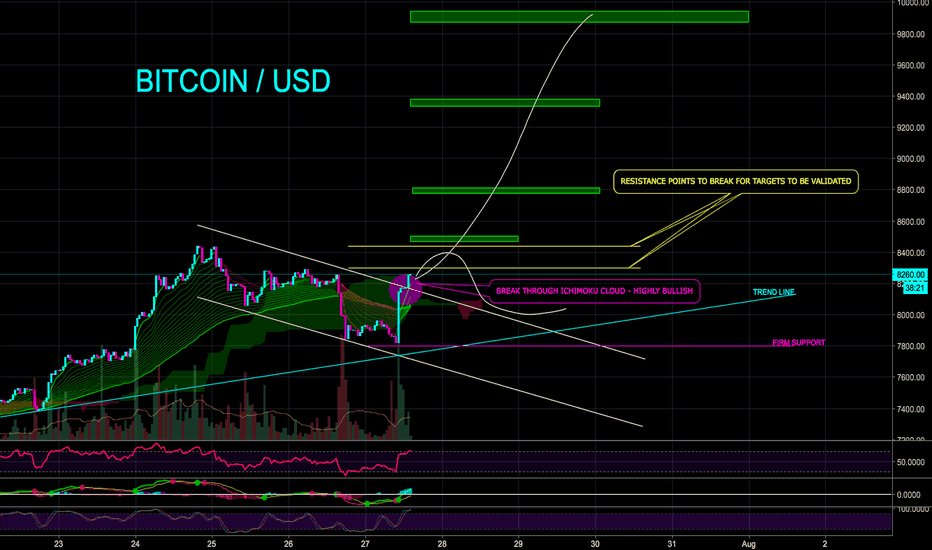 Overall, bitcoin has shown great power over the last week, surprising many with its sudden and unpredicted jump from $5,800 to about $8,200. Altcoins have been slow when incurring the same bullish qualities, but the daily low for bitcoin has fallen to $14.5 billion from about $17.5 billion, and the currency’s popularity is likely growing. The crypto market has expanded by roughly $3 billion over the past 24 hours, and about one-third of that can be attributed to bitcoin.

It is also the only digital currency that’s in the green. Entities like Ethereum continue to lag, while other top 20 currencies – like EOS, Cardano and Stellar Lumens – have all incurred losses of about 2.5 percent or higher. Bitcoin’s daily trading volume has also jumped from about $4.9 billion to $5.8 billion. $7 billion worth of bitcoin trading has also seemingly occurred on BitMEX, though these trades aren’t likely to be counted by CMC due to the lack of transaction fees.

One source suggests bitcoin’s price fell below $8,000 yesterday when the bitcoin ETF application submitted by the Winklevoss Twins of the “Social Network” fame was rejected. However, the price later jumped back over $8,000 after enthusiasts realized that the VanEck SolidX bitcoin ETF had a considerably higher chance of earning approval from the Securities and Exchange Commission (SEC).

The source also suggests that despite some oncoming resistance and a few ups-and-downs in the currency’s mapping, the future of bitcoin remains bullish:

“The short-term outlook remains bullish, despite the overnight correction in BTC prices. The 200-day moving average hurdle of $8,557 could be put to test over the weekend if prices find acceptance above $8,000 in the next 24 hours. On the downside, only a daily close below the rising 10-day MA of $7,718 would abort the short-term bullish view.”

A long-term rally appears to be heading our way granted bitcoin can close out the week above $8,050. Most analysts believe this is a done deal, and everything seems to be leaning in favor of the bulls, though technical experts also warn against overbuying, which could potentially put a damper in bitcoin’s goals and price spikes.