At press time, the father of cryptocurrencies has jumped by $500 in just 24 hours. Yesterday, the coin had fallen to its lowest point in months, and was trading at $5,800 for most of the day. Many analysts were skeptical about potential recovery, and were certain a bear period was likely to mar bitcoin’s progress for weeks or even months on end.

While it’s impossible to say if this jump is part of a short-term or long-term period of improvement, investors and traders are likely breathing a sigh of relief now that the currency has once again moved into the $6,000 region.

These last two weeks have been a series of hurdles for bitcoin, which fell to about $6,200 from $6,800. This price itself was a dismal misfortune considering bitcoin had been trading for roughly $7,600 the week before, but to fall to $6,200 was considered a major turning point, and not in a good way.

From there, the currency couldn’t make up its mind about what it wanted to do, or where it wanted to go. As a result, several swings from $6,100 to about $6,300 continued over the next several days, and yesterday’s drop to $5,800 was considered the final stake through the heart. 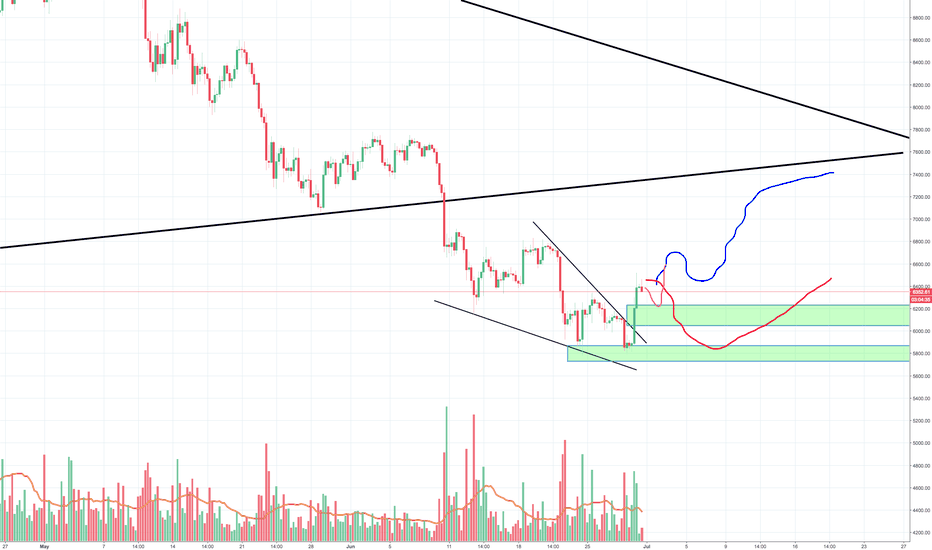 At press time, the next step to take would be a rise towards $7,000, but one source mentions there are several hurdles to surpass before bitcoin can reach this position. At one point during the early morning hours, bitcoin was trading for as high as $6,500 on some exchanges, though it appears the currency has retraced its steps a bit, meaning it’s not out of bear territory just yet. The source also mentions that bitcoin is likely to experience solid resistance at the $6,700 mark.

Indeed, many analysts’ predictions of $20,000 or even $40,000 by the end of the year are appearing unfounded, considering the growing volatility and regulatory scrutiny we’ve witnessed throughout the year. Sadly, several other analysts say the future looks bearish, and can no longer justify the words of their peers.

Technical analysts Fawad Razaqzada, for example, states, “I can’t base my analysis on anything other than technical information, and right now, the charts are looking very bearish. Therefore, as things stand, I have no reason to expect bitcoin to go to those crazy levels again.”

One of the biggest bulls for bitcoin has been Fundstrat’s Tom Lee, who has remained adamant that bitcoin will end the year at $25,000. Robert Sluymer – an associate of Lee at Fundstrat – says he can no longer agree with his counterpart, and believes his prediction to be incorrect.

“You have what is happening and what could happen, and I think if you are using technical [analysis] – and you have to be very truthful about what is happening – then we have a downturn in place,” he explains. “From my perspective, price is news, and [bitcoin] needs to show evidence of turning to reinstate bullish calls.”

On the other hand, CEO of BitMex Arthur Hayes believes bitcoin’s drop to $6,000 is part of a natural correction period, and suggests the coin will end the year at $50,000.

“I believe that a cryptocurrency that can go up to $20K and have a correction down to $6K within a six-month period has reached its bottom,” he affirms. “The cryptocurrency is one regulatory decision away from $20K or even $50K by the end of 2018.”