At press time, the price of bitcoin has fallen dramatically, and the currency is now trading for just over $6,700. This is about $900 less than where it stood just 24 hours ago. Investors were excited by the prospects that bitcoin had recently struck the $7,700 mark, and could potentially hit $8,000 again in the coming weeks. Now, with the price slashed so deeply before our eyes, most traders have no choice but to lower their expectations, and hope the currency reaches the $7,000 range once again. 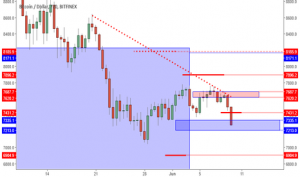 The massive drop seems to stem from several factors. During the early morning hours of June 10, Coinrail – one of the largest and most popular cryptocurrency exchanges in South Korea – reported a hack on its website. A statement read that “70 percent of its total coin/ total reserves were safe,” and that “Two-thirds of the coins confirmed to have been leaked are covered by freezing/ recalling through consultation with each coach and related exchanges.”

This ultimately led bitcoin, as well as every major form of cryptocurrency, to fall by roughly five percent or more. This includes Ethereum, bitcoin cash, Ripple and Litecoin. Bitcoin fell from roughly $7,600 to about $7,300 over the course of 30 minutes, and the total cryptocurrency market lost roughly $14 billion in that time…

But this is small beans compared to the near $600 drop that occurred after. The primary blame lies on subpoenas sent to four major cryptocurrency exchanges by the Commodity Futures Trading Commission (CFTC). The exchanges include itBit, Kraken, Coinbase and Bitstamp. The CFTC is requesting trading data from all four exchanges to determine if manipulative bitcoin futures trading is potentially causing changes in the bitcoin price.

According to the CME in Chicago, these exchanges work to determine the price of bitcoin futures, which have been available for purchase since December of last year. While futures are designed to insure against price movements, they can also be used to garner profit, as parties of a futures contract must predict “reasonable” prices for certain commodities in the future. Thus, it is necessary to have accurate data regarding an asset’s price, and price manipulation can render any future’s effects invalid.

Information from the four mentioned exchanges was originally requested by the CME back in January of this year, though several refused to cooperate, and the assistance that the CME did receive back then was limited. Now, however, many of these exchanges are once again denying necessary assistance – this time with the CFTC. Unfortunately, it can be argued that they are only delaying an inevitable process, as bitcoin is labeled a commodity and therefore subject to CFTC rules.

This war between the CFTC and the exchanges is allegedly causing several of the top 100 cryptocurrencies – including bitcoin, Ethereum, EOS, bitcoin cash and Ripple – to incur serious drops. Many analysts like Willy Woo predicted early last month that the price of bitcoin would fall to the $5,500 range, and granted things continues as they are, his prediction may come true. To lose almost $1,000 overnight is devastating for both bitcoin and the cryptocurrency market in general.