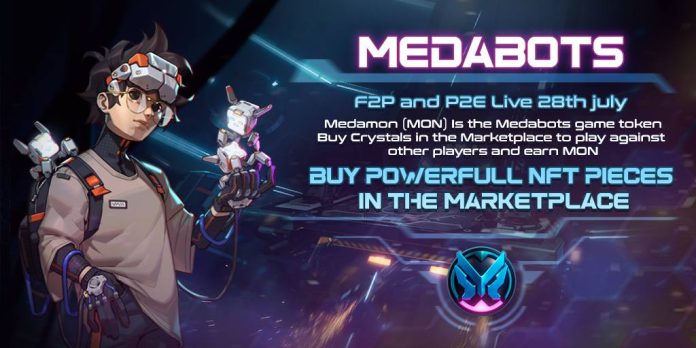 Comadran Studios is a pioneer in searching for the best entertainment paths, which made them create:

The game has been developed by industry giants that have worked in prestigious studios such as Riot, Marvel, Ubisoft, and Disney and combined forces to create their studio.

The team, led by Paul Sirats, a veteran of the industry and executive producer of the project, is composed of passionate videogame professionals. The founder of the game and CEO of Comadran Studios, Kevin from Andorra, is a natural-born gamer and has made it clear from the beginning:

“The idea is to become a reference studio in the entertainment and audiovisual market.”

In Comadran Studios, it is clear to them that they want to develop games they would love to play themselves, and Medabots is only the beginning.

The project encompasses several products: a platform/Marketplace with NFTs and “MEDAMON,” the platform token that will allow users to manage their assets in the game.

Moreover, the Medabots team has created a blockchain department, a benchmark in the sector, to put the ideas that no one has had before to work, such as; uniting the concepts Free 2 Play and Play 2 Earn in one game. They have needed countless development hours and R+D to reach their objective.

Medabots is a 3v3 tactical turn-based experience that uses NFTs. It allows the player to personalize his inventory and trade with his robots’ pieces through its marketplace, giving total freedom to personalize the player’s strategy.

Check out the official Medabots YouTube Channel for more info.

As well as the game, the project comes with an active community full of events and contests.

The multiplayer cards game, Medabots, which involves battles between robots and is hosted on the blockchain, is ready to revolutionize the crypto game world with its exquisite graphic designs and strategic game.

The project is also pleased to announce that the token, Medamon ($mon), based on the BSC net, has already been launched on the prestigious exchange Huobi, and its CEO assures the community that this is just the beginning.

Medabots is a free-to-play game where users can create their robots. The basic pieces can be obtained in the game, but the NFT pieces can only be purchased or minted in the market, and, among other things, these will make users earn money with their battles. As a result, each piece generates a card that can be used for the battles in the game. Each robot has its statistics, and the players can also increase their life, attack, shield, or speed by using the pieces with the desired statistics.

After downloading the game, users can play Adventure Mode. Once the player collects three robots in Adventure mode, he can play the League and Multiplayer modes.

The token MEDAMON will be used for:

The Medabots game will be available for download in Google Play Store and iOS App Store and can now be found on their website: https://medabots.game/.

GEM Digital Limited is a digital asset investment firm. Based in The Bahamas, the firm actively sources, structures, and invests in utility tokens listed on over 30 CEXs and DEXs globally.

Global Emerging Markets (“GEM”) is a $3.4 billion alternative investment group with operations in Paris, New York, and the Bahamas. GEM manages a diverse set of investment vehicles focused on emerging markets and has completed over 530 transactions in 72 countries. Each investment vehicle has a different degree of operational control, risk-adjusted return, and liquidity profile. The family of funds and investment vehicles provides GEM and its partners with exposure to Small-Mid Cap Management Buyouts, Private Investments in Public Equities, and select venture investments.

Today, Medabots is ready to emerge as the Crypto Gaming leader with the Play to Earn launch.

Disclosure: This is a sponsored press release. Please do your research before buying any cryptocurrency or investing in any project.