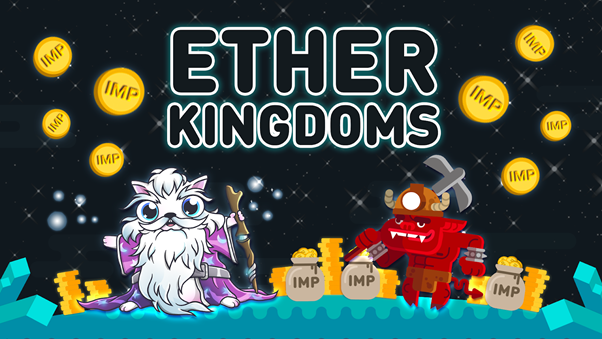 Ether Kingdoms, the world’s first F2P (free to play) PoS crypto mining game has announced the completion of its beta testing, which should bring it closer to launching as a fully-fledged game for users worldwide.

The game leverages proof of stake mining, which is far more energy efficient compared to proof of work when it comes to securing the network. Users are able to receive up to 1% of mining rewards per day if they can send 10,000 IMPs to go to the mines for them.

Also unlike other games that are either text-based or have basic visuals and media, Ether Kingdoms is a visualized game, with full gameplay mechanics that will prove to keep players playing.

Imps are both tokens within the game as well as characters that help players earn money. Users can also send their IMP’s to go fight other players, simply done by clicking the “Fight” button and selecting how many Imps to send to war.

Users can either fight in PVP situations, but also in new clan battles. Users can also fight against global and local opponent bosses, to add another familiar element.

Artifacts can be used to improve chances of the outcome ending in your favor, as well as only 50 players being able to receive a unique artifact which guarantees the maximum 1% daily mining rewards.

Artifacts are special in their own regard, being ERC721 tokens. These tokens can be traded on platforms that support the ERC721 standard (like OpenSea), or otherwise traded with players. The powerups can be used for weekly leaderboards, to see who really the is the best of the best.

Otherwise, players can also use Cryptokitties tokens as pets, and to receive game bonuses. CryptoKittie integration will allow users that may have joined the train due to the hype but are looking to still get some use out of the tokens they invested within the game.

An integration like this is also the first of its kind and should increase the player count of Ether Kingdom significantly. It also may raise the value of certain CryptoKitties that give certain bonuses that could be valuable within Ether Kingdoms.

For more information about Ether Kingdoms, check out their website. For social media updates about the project, make sure to follow them on Twitter as well as Facebook. More in-depth blog posts and articles will be posted on their Medium. For discussions about the project with the community and team members, make sure to check out their Telegram. For voice chatting and gamers already on the platform, Ether Kingdoms has a discord channel. For discussing more general cryptocurrency topics, Ether Kingdoms has a Bitcointalk thread that users can ask questions on. Lastly, the project also has their own Reddit.