To get started with Gods Unchained, simply navigate to their website and download the client. You will need a beta key in order to start playing. You need to be invited to get in, but if you’re interested in trying it you’re welcome to use my beta key!

Once you login using the beta key and link it to your account, you can login on the client to your player dashboard. It should look something like this: 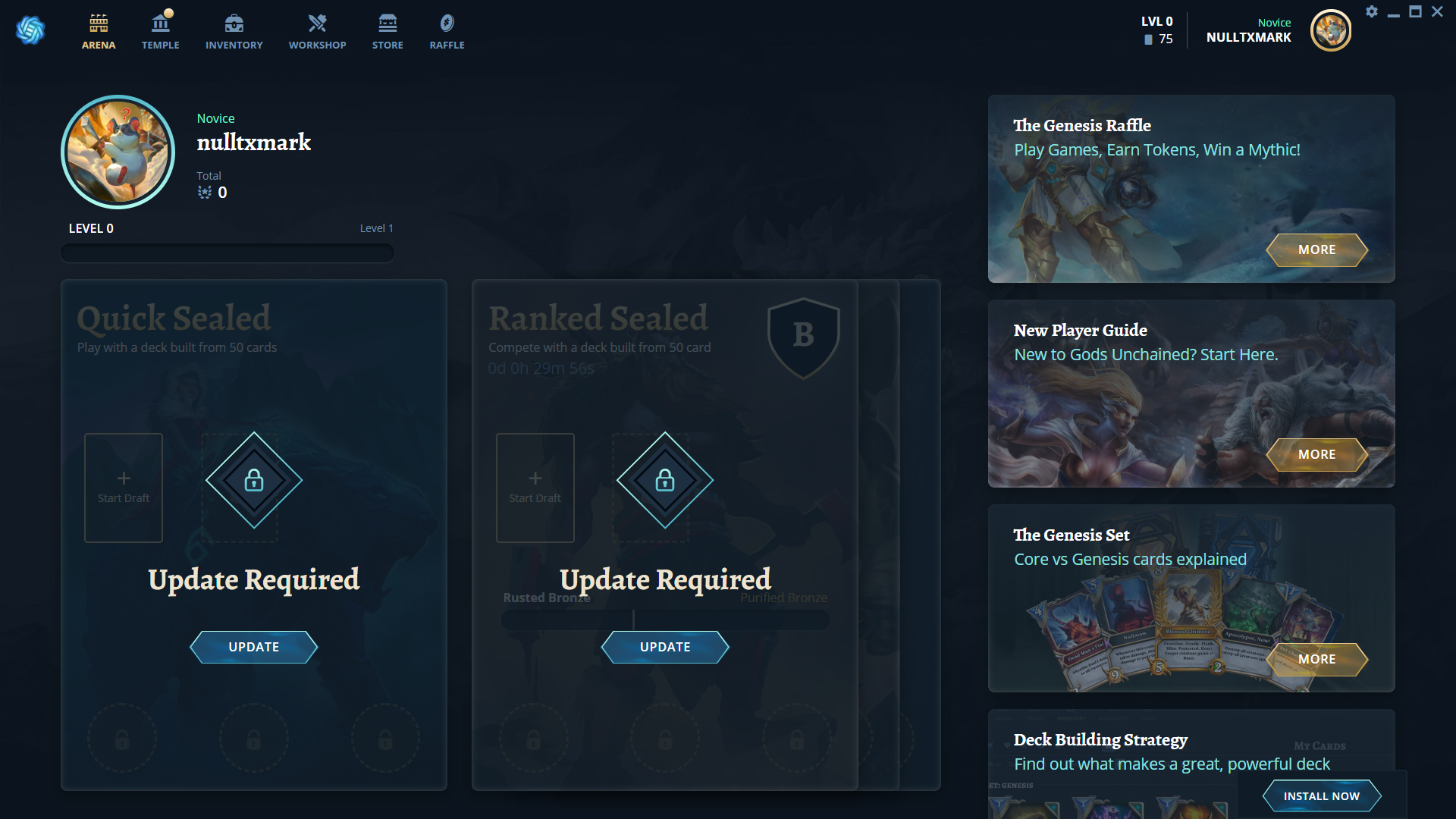 You will need to update the Quick Sealed and Ranked Sealed section, hit the update button and give it a few minutes. While it’s updating you can go to the Temple, which is where you open packs. As a new player you will have 3 free packs that you can 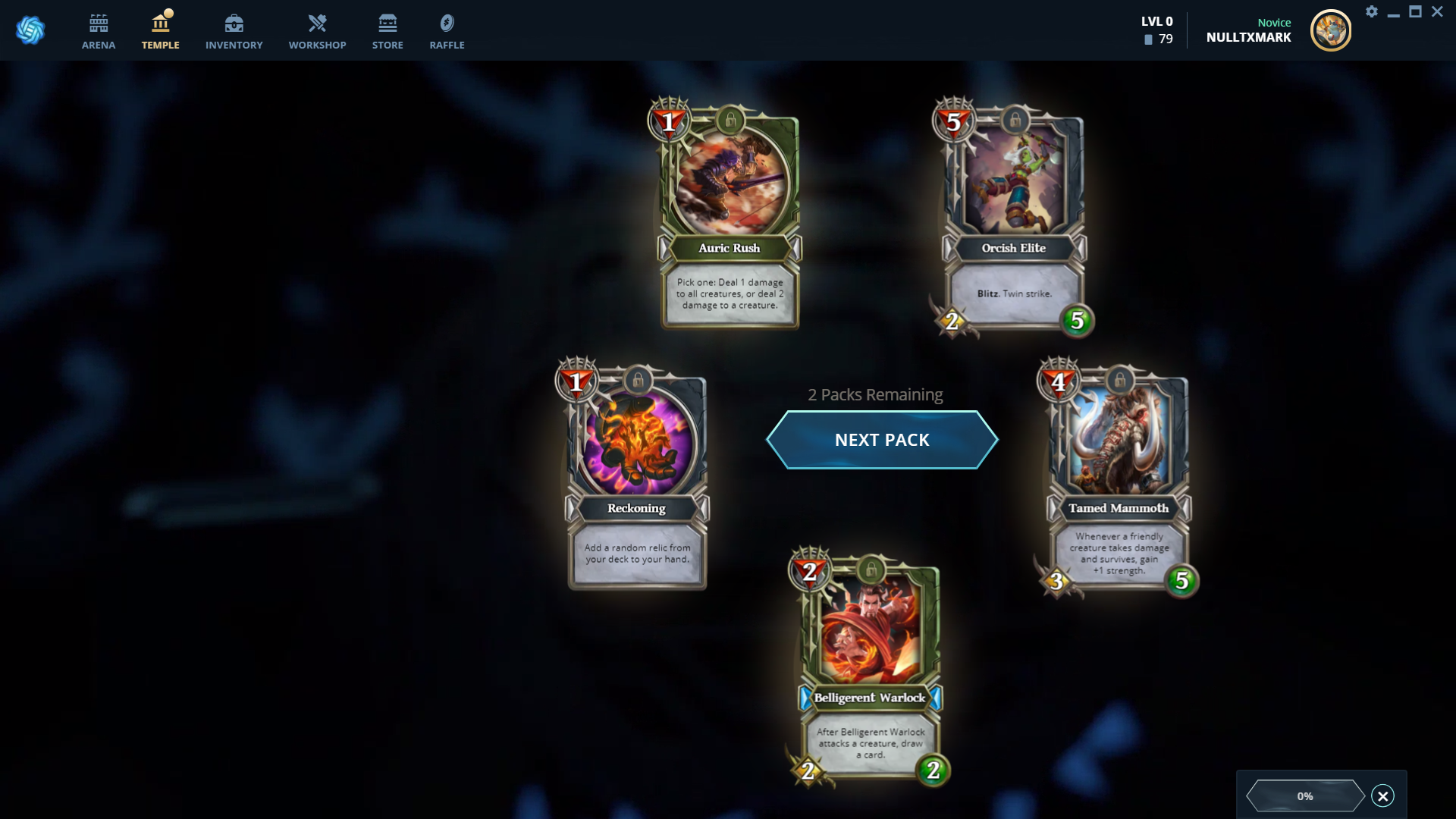 When it comes to the trading cards, there are four types of tiers: Rare, Epic, Legendary and Shiny Legendary. You can get special cards by playing the game, but if you want guaranteed rarity you can buy card packs via the shop.

Keep in mind it does get quite expensive, if you want the pack with a guaranteed shiny legendary, that will set you back a hefty 1 ETH.

Once the game has been updated you are ready to play. The first mode is called the Draft. This is where you choose 30 cards from a set of random cards and play against opponents. You will battle players until you hit 3 losses, after which you will be eliminated from the draft.

There are four battle modes: Quick Sealed, Rank Constructed, Constructed, and Solo. They all feature different type of gameplay. Quick Sealed is a draft type game where you choose a deck of 50 cards and play against other players. The other three modes require a pre-built deck to play.

At the beginning of each game, you have an option to select a few cards that you want to remove from your hands. Extremely similar to Hearthstone and Relentless. 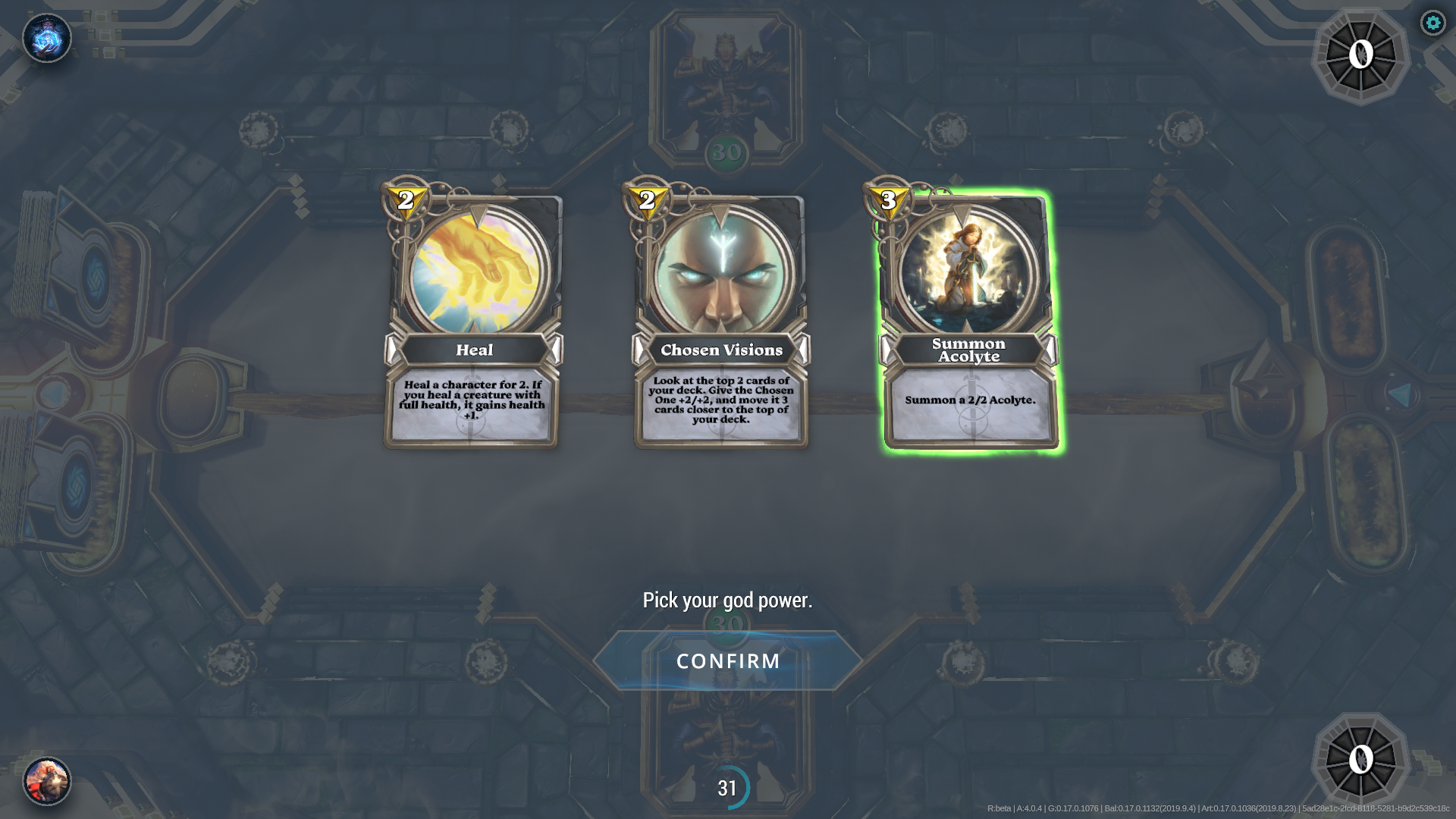 The battlefield looks somewhat “royal” It looks like the battle takes place in some sort of divine castle. Interesting take on a theme especially comparing it to Relentless that went with the zombie theme. 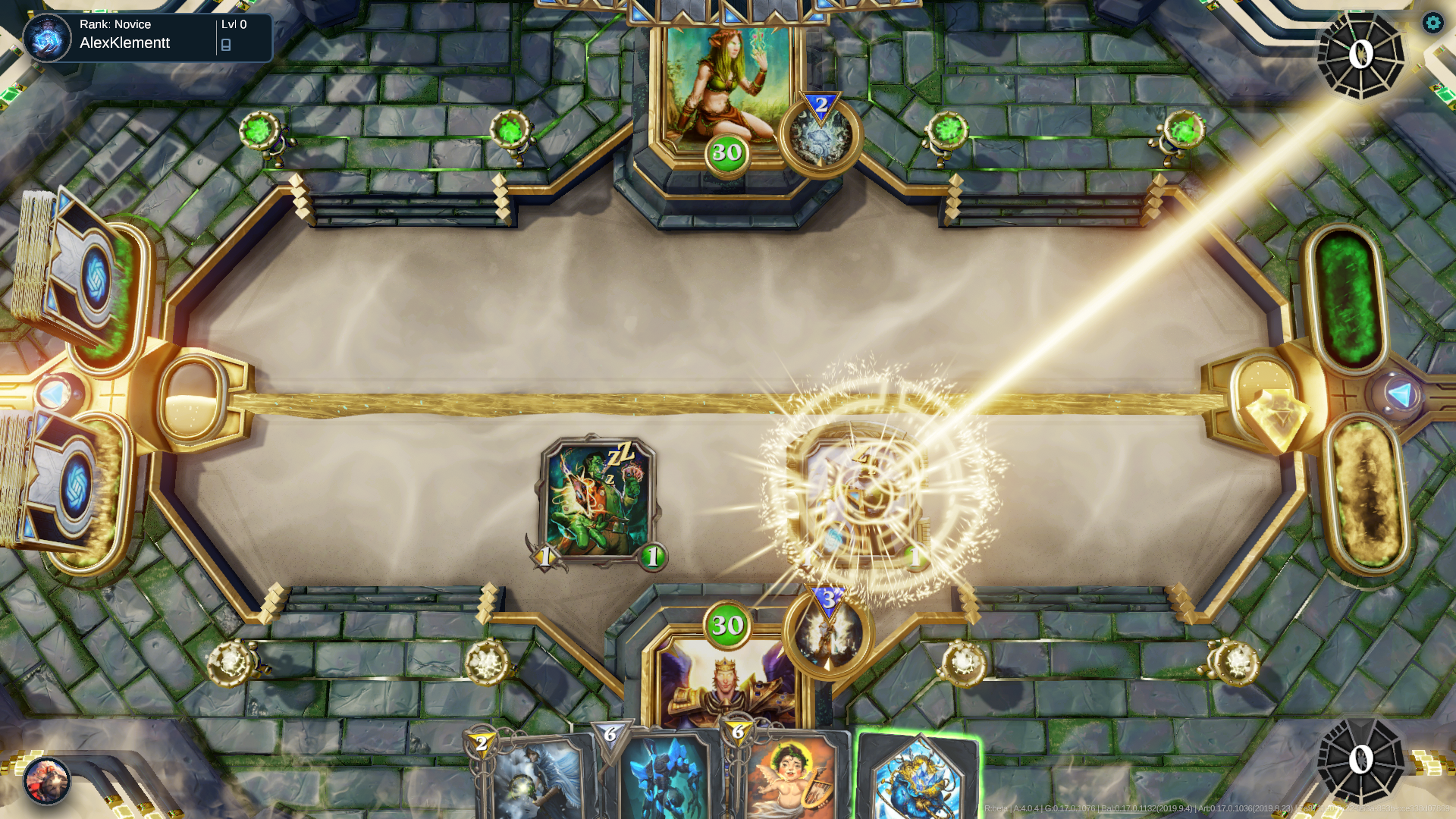 The controls and the animations were very smooth, there was minimal delay in placing cards and performing various actions.

Once you get three losses, you get a prize depending on how many wins you got. The more wins the better the prize. Each win will help you gain levels on your character, which helps you unlock more abilities and get more rewards. 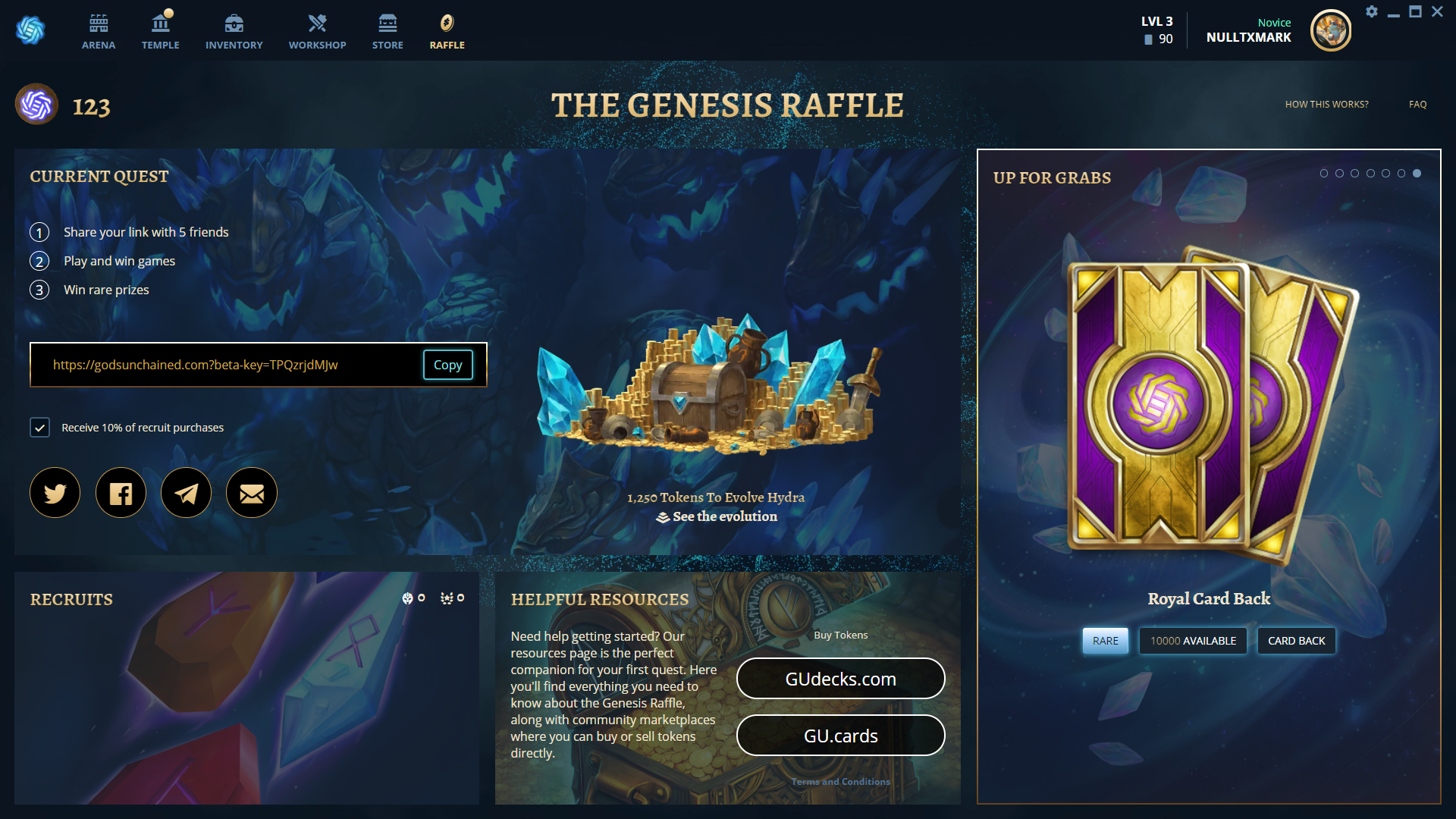 When you win matches, in addition to gaining levels you will also be rewarded with raffle tokens. These can be used to enter The Genesis Raffle. The raffle tokens are actually tradeable ERC20s that can unlock rare in game items. Each raffle token grants you an entry in the raffle, which has some rare prizes up for grabs.

If you’re a Hearthstone fan, then you must check out Gods Unchained. The fact that it’s a blockchain based game, means you have full control over your cards. The game didn’t feel to pushy when it came to buying packs, and all the features can be unlocked simply by playing the game. What’s more, is it’s completely free to start playing Gods Unchained, so there’s no excuse for you not to check it out.