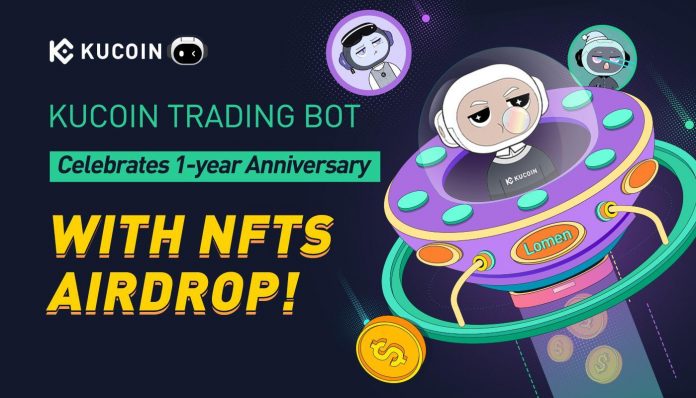 The KuCoin global cryptocurrency exchange is preparing to celebrate the first anniversary of one of its most successful products – the KuCoin Trading Bot. The celebration will be marked with a series of giveaways and limited edition NFT releases.

The KuCoin Trading Bot is one of KuCoin’s most successful products, which was relied upon by the exchange’s users to launch over five and a half million automated trading bots since its launch in early 2021. The total volume of profits generated by the Bot since its launch has amounted to over $150 million, making it one of the most popular products of its type on the market.

The main advantages of the automated construct include a variety of time and cost-saving features that help users continue profiting under various market conditions. Over 300,000 users are said to have used the Spot Grid strategy alone within a month since the launch of the Trading Bot. The toolset available has since been expanded to include DCA, Futures Grid, Smart Rebalance, and Infinity Grid. At present, the Trading Bot provides users with access to 665 trading pairs for spot and 79 for futures trading.

The KuCoin exchange is launching a KuCoin Trading Bot carnival in response to such popularity of the product and has announced that it will be giving away over $100,000 worth of bonuses and giveaways as part of the event. The carnival will also feature handouts of limited edition NFTs, called Lomens, which are represented by 10,000 unique trading bots with fancy appearances and advanced features. All NFTs will be released on the KCC NFT marketplace once the event ends. Other prizes to be distributed during the event include newcomer bonuses, discounts and rebate coupons.

KuCoin announced earlier in December of 2021 that it had reached an important milestone, surpassing the 10 million users mark, allowing it to enter the Top 5 crypto exchange list. The price of the native KuCoin KCS token registered a 3,000% increase in price since the beginning of 2021, spurred by surging demand for cryptocurrencies and overall market growth.