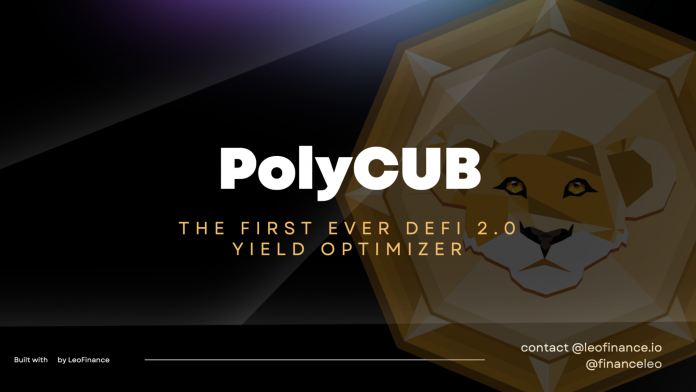 On March 5th, the successful launch of the next-generation of DeFi yield-optimizers – PolyCub – showed the LeoFinance Community and DeFi industry what happens when a team does the proper research to develop an idea with the intention of creating long-term value and opportunities for their community.

By merging the mechanics from several other successful projects while running thousands of Monte Carlo simulations to create the ideal scenario for yield optimization on the Polygon Network, PolyCUB achieves what few – if any – other projects have achieved before:

Just 20 days since PolyCub’s genesis, the time spent running simulations morphed into experimentation in reality. The LeoFinance team has proven several theories that served as a basis for the tokenomic design of PolyCUB and have confirmed the potential of the game theory behind the tokens ecosystem development: 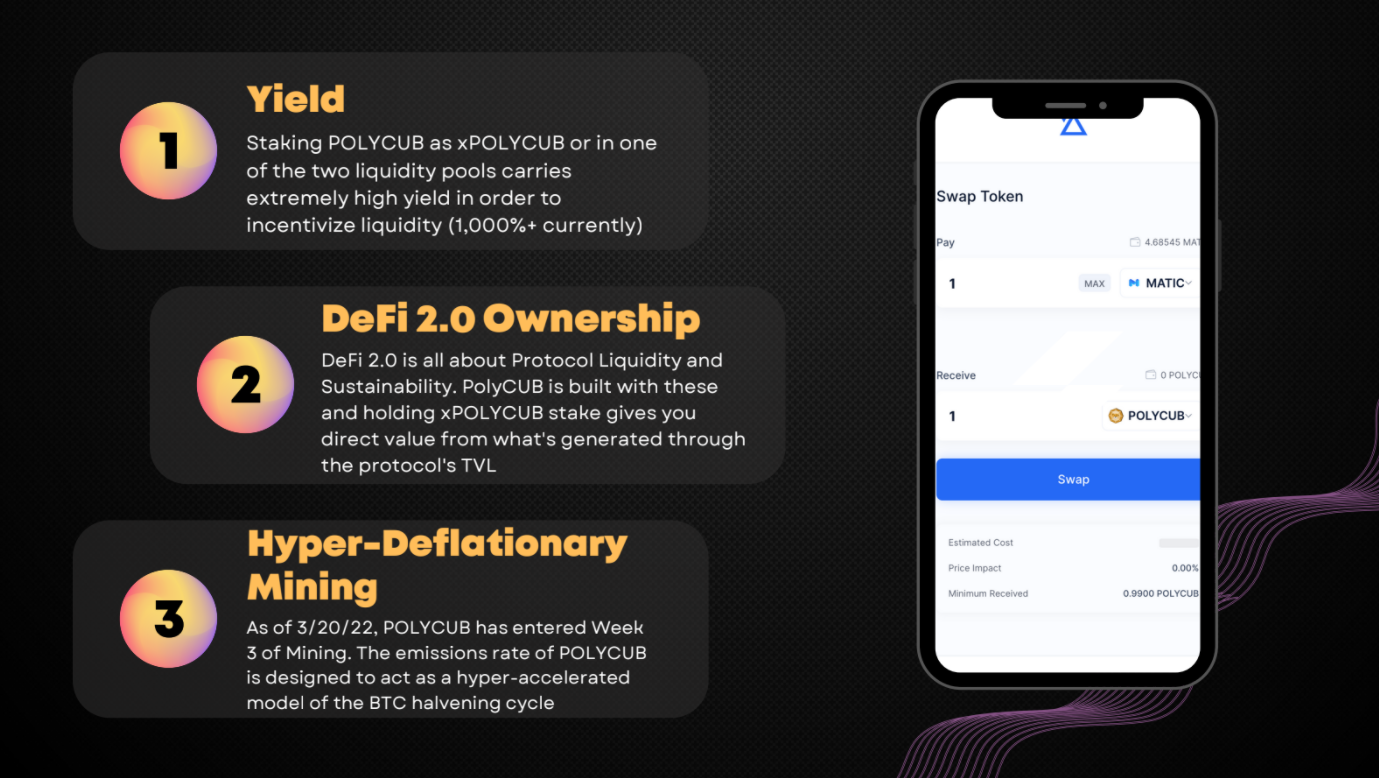 This is not the whole story, but these three value generators are more than enough to make anyone feel curious about PolyCub and make them do their research on https://polycub.com. The POLYCUB token is designed to go up in value in perpetuity – just as the scarcity dynamics and utility of Bitcoin do for the largest cryptocurrency on the planet.

To add to these three key value propositions, PolyCub is built by the LeoFinance Ecosystem, which has one of the longest-standing communities in DeFi with a background in building blockchain apps for more than three years. With one of the most active communities in the industry that has tens of thousands of long-term holders, its no wonder that every single day more and more people buy into this innovative ecosystem that happens to be just the second step in a long and ambitious roadmap that aims to provide value and generate many more alpha opportunities for those who do their research and decide to join this platform as xPOLYCUB stakers.

Future Upside for POLYCUB is Astronomical

It is true that the Farms, Kingdoms vaults, and xPolyCub staking provide APYs in the four figures, but that is nothing compared to the fundamental long-term value proposition that PolyCub’s Roadmap proposes: 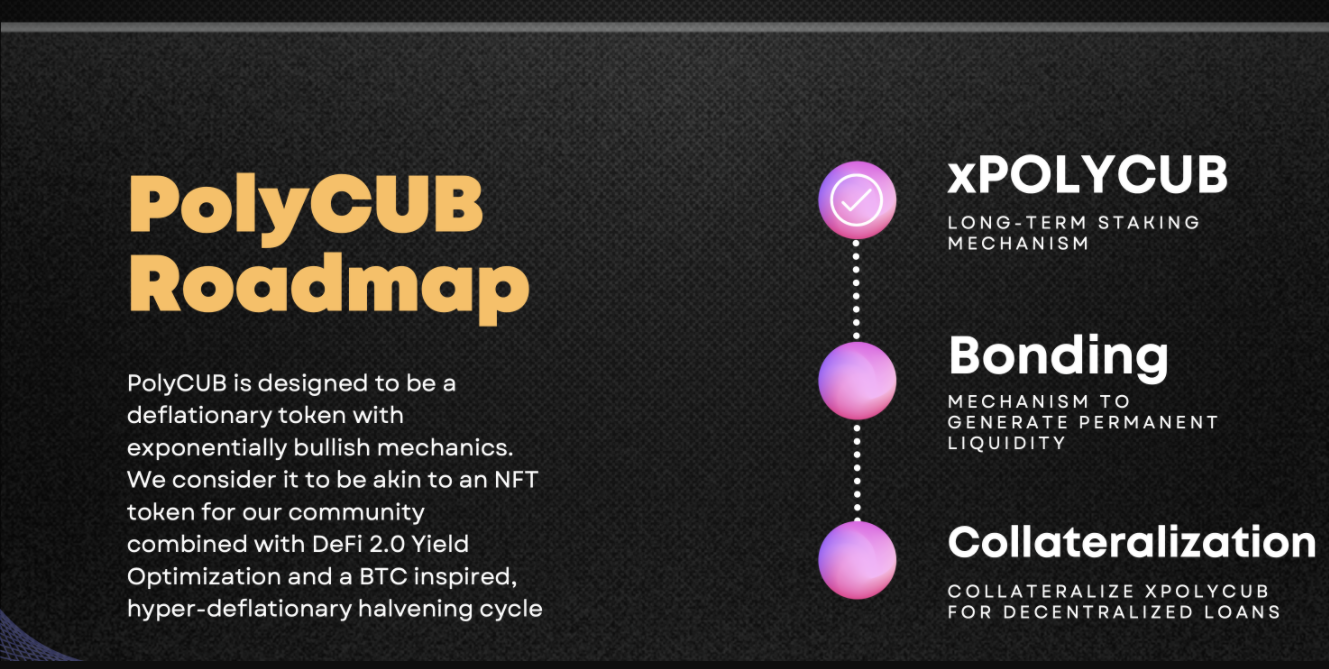 The next step for PolyCub that is currently happening as you read this article is Bonding, which provides permanent liquidity to the protocol via POLYCUB-USDC and POLYCUB-WETH bonds. Allowing other bonds in the form of WBTC-WETH, stablecoins, and other Kingdoms LP assets enables users to bond external assets and earn greater returns on POLYCUB. These bonds are then held by the Protocol Liquidity and used to buy back POLYCUB and distribute long-term xPOLYCUB LP Incentives.

Once the emissions rate of PolyCub drops to almost zero, the Protocol Liquidity will begin to buy back PolyCub tokens from the market and thus continuously add demand to the token in perpetuity. Then, the protocol will distribute the market-bought PolyCub amongst the Liquidity Pools that will no longer be earning from the emission rate – another self-sustainable theory to be confirmed – and will then be earning from the buyback distribution.

This process will send the vast majority of PolyCub back into the xPolyCub vault, eating away the circulating supply and providing more PolyCub scarcity and demand for xPolyCub Staking.

Are You Convinced About the Future of PolyCub?

There’s one more value proposition on the near-term roadmap that is intended to drive value to the diamond paws – the equivalent of diamond hands in the LeoFinance Community – and that is Collateralized Lending: Users will be able to stake their xPOLYCUB tokens into the collateralized loan contract and take out a loan from the Protocol Liquidity in exchange.

The release of POLYCUB provides a glimpse into the future of DeFi 2.0 Yield Optimizers. We see the early distribution of a highly scarce asset – with only 7.2 million POLYCUB.

That scarce asset is being coupled with long-term, sustainable yield generation dynamics through Protocol Owned Liquidity. These mechanics are then combined with Collateralized Lending on xPOLYCUB stake, which gives users the option to diamond hand POLYCUB in perpetuity. Instead of selling POLYCUB, users are given the ultimate value proposition to hodl POLYCUB as staked xPOLYCUB, earn 30%+ APY, and take out self-paying loans against their stake when they want liquidity.