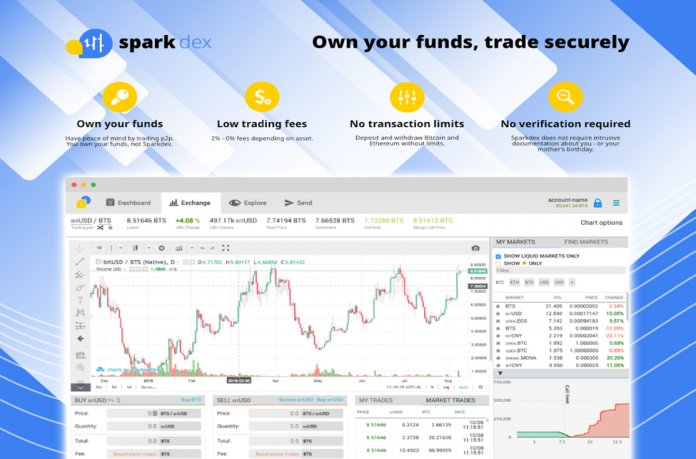 Security is paramount in the blockchain world, equally for startups, decentralised exchanges and cryptocurrency traders. Without solid and dependable security systems in place, the whole operation collapses. Unsurprisingly, therefore, new companies and exchanges are keen to highlight their security credentials to instill trust in potential customers, the existing userbase, and the global audience in general.

Announced just days ago, the launch of Sparkdex on August 30th was a milestone for both the company and Hong Kong, as it will be the first decentralised cryptocurrency exchange in the region.

Sparkdex is variously described by its creators as ‘Hong Kong’s first portal to the world’s leading decentralised exchange’ and ‘the only decentralised exchange purpose built for pegged cryptocurrencies’. Sparkdex was created by Spark (formerly known as Bitspark), a Hong Kong-based fintech company founded in 2014. Sparkdex forms part of Spark’s secure web/mobile ecosystem. This uses BitShares-based blockchain technology to enable businesses and consumers to quickly and cheaply transfer funds via stablecoins which are pegged to over 180 international currencies.

Spark claims to provide ‘a bankless future for money transfers’ and tackle some of the security issues plaguing the industry, thereby inspiring trust and confidence in cryptocurrency traders. Company publicity material states that Bitspark conducted the world’s first bitcoin-based money transfer in November, 2014. No bank account or knowledge of cryptocurrency is required for someone to use Spark’s services. This makes it attractive to people without accounts and de-risked businesses, with access available in more than seven countries in the African and Asian regions: Hong Kong, Malaysia, Ghana, Nigeria, Philippines, Indonesia, Vietnam and Pakistan. According to George Harrap, CEO and co-founder of Spark,

“Spark is proud to be debuting Sparkdex which enables traders to access the world’s largest, most active, most liquid and highest capacity exchange in the world.”

In addition, Maxine Ryan, COO and co-founder had this to say about Sparkdex:

“The Sparkdex is next generation trading available now. It’s the biggest advance in trading security from centralised risk since cryptocurrency exchanges went mainstream. We are excited to begin building Spark’s liquidity from our international markets directly on Sparkdex.”

Benefits of Sparkdex for Cryptocurrency Traders

With Sparkdex, for the first time on a decentralised exchange in Hong Kong, traders will be allowed to own their funds (rather than the exchange) and conduct P2P (peer-to-peer) trading. Spark’s exchange is specifically geared towards stablecoins, cryptocurrencies and tokens, and according to the developers, has been created with the security of traders in mind. With user privacy firmly on the agenda, Spark have engineered Sparkdex so that verification is not required — a user does not need to present personal documentation to use the system. Additionally, there are no limits on Bitcoin or Ethereum withdrawals or deposits, coupled with low trading fees between 0% and 0.2%, depending on which assets are being traded. Transaction speed has also been taken into account, with Spark claiming a proven capacity of up to 100,000 transactions per second.

With Hong Kong being one of the world’s main financial hubs, and interest in decentralisation rising in Asia and elsewhere, it should surprise no one that a secure and decentralised exchange such as Sparkdex should originate there. If Sparkdex’s mix of security, convenience and speed not only ticks all the boxes it sets out to, but partners effectively with the rest of the Spark ecosystem, there should be no shortage of users in the future, whether they be in Asia and Africa or the wider world.