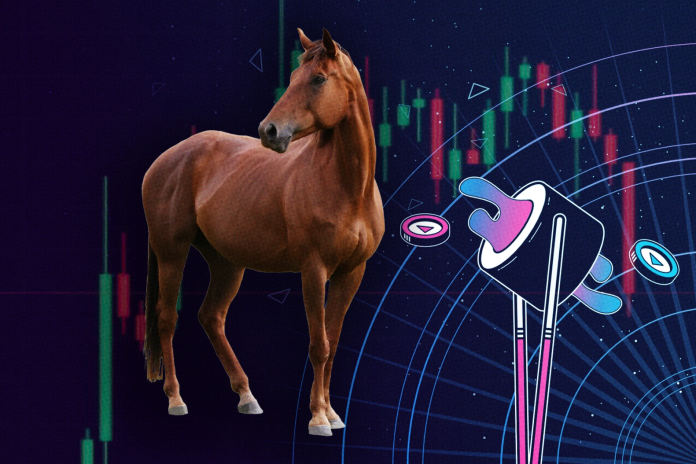 Jared Grey, newly appointed ‘Head Chef’ (equivalent to CEO) of the SushiSwap decentralized exchange, has found himself the target of many accusations, which has caused the SUSHI token to increase significantly in volatility.

SushiSwap’s decentralized status means investors can vote in those whom they wish to lead the protocol, with Grey coming out top dog. However, not long after being thrust into the limelight, allegations of scamming investors and even sexual acts with a horse began circulating on Twitter and other cryptocurrency media.

Grey has been accused online of stealing from the crypto community in 2019 via a project named ALQO. The core of the accusation is that he introduced the wallet for ALQO named Liberio, which was then used to steal around 70% of the entire supply of the token. Grey has Tweeted his innocence in this, stating, “the accusations towards me are 100% untrue.” According to him, via a Medium post at the time, his business partner Kevin Collmer was the one to blame, who was subsequently fired, and all affected investors were refunded. The SushiSwap boss also said, “I have always operated with integrity in this space; you can reach out to anyone I’ve worked with directly over the years. I’ve had business failures, which crypto Twitter likes to scrutinize, and I’m OK with that because it comes with the territory.”

On top of this, the online cryptocurrency community began to circulate allegations that Grey had engaged intimately with a horse. As of yet, no evidence has been provided to support the claim. This all resulted in an over 10% drop in the SUSHI token value as investors sold off their holding, followed by a pump back to its pre-drop price.

All this insecurity in the SushiSwap platform will be good news for UniSwap, the biggest DEX on Ethereum and rival to the food-based exchange, with people seeking to keep their assets in more stable platforms.

New launcher Uniglo.io, set to launch on UniSwap imminently, will also be excited to hear this ‘news.’ With investors moving over, the capital influx is likely to increase for GLO once they launch after the presale finishes next month.

GLO is a token backed by a basket of real-world assets stored on-chain in a tokenized format. These assets will prove a value to the Uniglo protocol and assist in supporting a bottom price in periods of volatility. In addition, the Ultra Burn Mechanism will no doubt boost the value of each token over time, making this a sound investment for the future. For more information, you can check out the Uniglo Medium here.