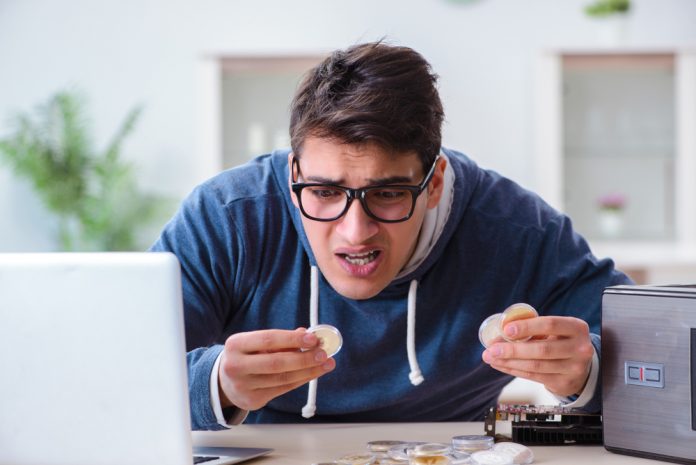 We’ve all seen the headlines. Dive deeper into the world of digital currency and there’s a decidedly seedy layer lurking underneath. We’re talking about drug barons and tax evaders, cybercriminals, and rogue miners. And if that weren’t enough, you have to make sure you don’t fall victim to ICO scams as well.

If you can stay out of the path of the hackers, phishers, and digital thieves costing the industry around $9 million a day, you’re lucky. But there are plenty of others who’ve placed their bets on the wrong horse. An ICO advisory company, the Satis Group, has revealed some pretty eye-opening statistics. 80 percent of all ICOs are scams.

Of course, the definition of a “scam” is up for debate. After all, just because an ICO fails does not mean it’s a scam. 90 percent of all startups fail. That’s not because they were necessarily scams, but simply because of mismanagement, lack of budget, or a poor marketing strategy.

But while we won’t tarnish every ICO that doesn’t see success with the same brush, it pays to remember that there are a lot of bad actors out there intent on separating you from your Ether.

Let’s take a moment to look at the seven biggest scams in crypto history and what we can learn from them.

Bitconnect was an exchange platform allowing users to exchange their Bitcoin for the Bitconnect Coin (BCC). If that sounds pretty dodgy already, that’s because it was. Add the astronomical returns promised to users and the refer-a-friend “Ponzi scheme” tactics they had going on, and it’s not hard to see the unhappy ending that would unfold.

Bitconnect also ran their own lending program in which BCC holders could lend their coins to other members and theoretically earn interest.

Closing down after just one year in operation and after two cease and desist orders from American financial regulators, no one (except its users) was sad to see Bitconnect crash and burn. The company is still going through lawsuits from users trying to recuperate their losses.

A classic case of a blockchain company selling something it didn’t own, GAW miners sucked in over 10,000 investors. They weren’t selling life-changing travel, or social media platforms; just shares in a Bitcoin mining operation. The catch? They never had the computational power to mine all the Bitcoin they promised.

While most of those poor investors never got their money back, GAW Miners was a big win for the SEC. After a long-running case of over two years, CEO Josh Garza was finally fined $9.18 million for his part in the scam, as well as over $700,000 in prejudgment interest. Even the fancy technological jargon and cutting-edge marketing materials weren’t enough to save DAW Miners in the end.

A classic case of smoke and mirrors, the team behind Centratech went to amazing lengths to catch investors’ eyes. They even managed to get endorsed by DJ Khaled and boxing icon Floyd Mayweather.

But it wasn’t just the celebrity endorsement that appealed to younger people. Centratech proposed a Visa and MasterCard debit card service that would allow its users to convert cryptocurrency to fiat with ease.

Great idea. Shame it wasn’t real. After raising $32 million in its ICO, the founders were arrested and the SEC highlighted the “extreme lengths” to which they’d gone to dupe investors. That included fictitious management teams, invented biographies, and paying celebrities to endorse the scam on social media.

One of the few scams in which the perpetrators actually got their just desserts, the two founding members will be made to return all the stolen funds – with interest. They’ll also be forbidden from serving as company directors or officers as well as participating in a security offering.

Pincoin’s epic exit scam is so recent that unsuspecting investors are still positively reeling. Modern Tech, a Vietnamese cryptocurrency company, held an ICO that raised $660 million for its token from around 32,000 investors.

True to their word, the Pincoin team kept investors happy and had them inviting their friends, making good on promises of cash rewards and returns. And then they launched another token, the iFan.

As soon as investors started getting compensated in iFan rather than cash, the unscrupulous team packed up and disappeared into the night. Labeled by Techcrunch as the “largest exit scam in recent memory,” Pincoin left behind an empty office and a barely functioning website. Oh, and a whitepaper full of nice long words.

If only their investors had thought to dig a little deeper, they would have seen that no clear information about the company’s founders was to be found. The lesson? Don’t be fooled by a fancy website and a posh PDF. And if 100 percent ROI is on the table, it’s definitely a scam.

Regulators have been getting it from all sides. It’s one of those “damned if you do, damned if you don’t” kind of places to be. Those against lawmaking raise their voices to the skies, claiming that regulation will quash innovation. Those in favor have been doing a clumsy dance with various entities trying to figure out who should move first.

But in the United States, the SEC exists to protect investors (quashing regulation is just a secondary function). The fact remains that if ICO scams continue and investors keep losing money, the whole crypto market will collapse. And that’s the message behind this next scam.

The HoweyCoins scam is so interesting because it was launched by the SEC itself in a bid to educate and warn investors about the type of ICO they should avoid. It came complete with fake social media profiles, zero background info on the team, and promises of daily returns. With wording like “you won’t want to miss – act now!”, they definitely proved a point.

OK, so it’s debatable whether the Smominru Miner deserves a place on the scam list. But it’s just such an ingenious money heist that it’s worth pointing to. Unlike actively signing up for an ICO scam or transferring Ether to a public wallet, victims of this mighty botnet were completely unaware.

The Smominru Miner was engineered by a rogue hacker using EternalBlue to infect over half a million computers with malware. For what purpose? None other than to cryptojack victims’ computers and force them to mine Monero. Victims didn’t even realize it was happening until their computer fans kicked into overdrive or their electricity bills arrived.

It wasn’t a full-on, over-hyped, over-marketed scam, but the crafty hackers still managed to mine over $3 million worth of Monero.

OneCoin has been called into question several times over the last few months. But the amazing thing about OneCoin is that its team is still hanging around and you can still invest if you want to. We seriously advise you don’t.

What’s the deal? OneCoin was labeled a “Ponzi scheme” in India in July of last year and later fined €2.5 million by Italian authorities. Just in case you need a refresher, a Ponzi scheme is one in which investors are tricked into investing in a company that does not exist. As more people jump on the bandwagon, their investments are used to pay out returns to those who invested initially. But once the scheme fails to attract new investors, it inevitably withers and dies (along with investors’ funds).

OneCoin has been clocking up negative press around the world, with its offices raided in Bulgaria and its servers seized. The company has also ruffled feathers in India, paid fines in Italy, and had $30 million taken by the Chinese authorities.

Somewhat ironically, its website talks about integrity and transparency, while the opposite is clearly going on. OneCoin is on the risk list of at least five countries so far.

What Can We Learn from ICO Scams?

If it looks too good to be true, it probably is. If it’s offering “guaranteed” returns, or asking you to invite a friend, it’s potentially a Ponzi scheme. And if returns come back too quickly, or information about the team is thin, it’s definitely time to rethink investing. Be careful out there. They don’t call it “the Wild West” for nothing.