At press time, the father of cryptocurrencies is trading for about $6,500. This is roughly $100 less than where it stood yesterday, which in turn was $400 higher than where it had been trading the previous day.

Bitcoin has been an up-and-down game for nearly the past week. Problems first stemmed when it was announced that the Commodity Futures Trading Commission (CFTC) had subpoenaed four primary cryptocurrency exchanges (Kraken, Coinbase, itBit and Bitstamp) to gather trading data for bitcoin futures. The CFTC is investigating whether price manipulation has entered the bitcoin market since December of last year.

Following the announcement, the currency dropped from $7,600 to $6,700, marking a $900 fall. From there, bitcoin remained stagnant for about 48 hours until another $500 drop occurred, bringing the currency down to $6,200. At that stage, bitcoin was looking rather gloomy, and analysts like Willy Woo suggested that bitcoin would strike the mid $5,000 range before experiencing any form of recovery…

But following the Security and Exchange Commission’s (SEC) announcement that both Ethereum and bitcoin would never be securities, the price of the currency shot up dramatically. $400 later, bitcoin was trading for $6,600, thereby giving both investors and traders alike the sense that all was not lost. 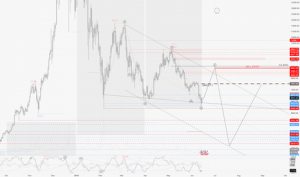 Now trading for $100 less than yesterday’s price, it’s clear recovery is going to be a very slow – almost painful – process, but bitcoin probably is not going to drop any further. In fact, figures like John McAfee – who recently announced his bid to run for president in 2020 – are tweeting that the currency price is nothing to worry about, and that investors shouldn’t alter their trading behaviors based on current trends.

During the morning hours of June 15, McAfee took to Twitter to say:

“The main stream media – controlled by the existing power structure – reports that price manipulation was involved in bitcoin’s price rise last year. Manipulation did happen, but it was a conspiracy to push the price of bitcoin to the absurd low level that you see today. Wise up!”

His tweet suggests that the currency’s rise to nearly $20,000 over six months ago was part of a natural process, and that manipulation is working to bring bitcoin down to its lowest levels since March of 2018.

“The powers that be have no plans to lose power over the financial sector, whatever the future of currency holds. They’ll push the prices down as far as possible and push as many people out as they can before they admit to jumping on board. Class warfare at its finest… I will not now, nor will I ever, accept this as a reality. I am submitting now to this law, but I will fight with every breath to ensure that this absurd overreach by the SEC will not stand. It will not stand!”

In closing, McAfee explained to his followers that they should not stop buying coins; that the price drop is an overreaction to the news that the CFTC is subpoenaing the four mentioned exchanges, and that the price should go back up within the next 30 days.