In an extremely disappointing move today, the father of digital currencies has fallen by an additional $500 and is now trading for just over $6,200. This is very disheartening news, as recovery does not appear to be in sight, and the $5,000 range for bitcoin seems imminent – a fate we were all hoping to avoid.

Analysts like Willy Woo suddenly appear to be the ultimate “knowledge hounds” when it comes to bitcoin’s stance. A few weeks ago, the financial expert explained on Yahoo! that he saw bitcoin dropping into the mid-$5,000 range (likely around $5,500) before any sort of recovery could be expected. 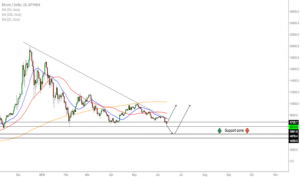 This also raises serious questions regarding price predictions set by Tom Lee and other figures in his position. For several months, Lee has been adamant that bitcoin will strike $25,000 by the time 2018 is ready to make its exit. However, considering we only have six months left before the year strikes out, this seems like a very far-fetched prediction.

While it’s not impossible, bitcoin price spikes have been shown to require time before they can occur in drastic fashion. We are now talking roughly six months to grow another $20,000. That seems very complicated…

In a recent study, investors’ fears have now been officially confirmed – that bitcoin’s price was indeed manipulated in 2017. The $20,000 spike was something of a fluke, primarily thanks to Tether, one of the world’s most traded cryptocurrencies.

Finance professor John Griffin at the University of Texas released a whitepaper stating that Tether was largely used to purchase bitcoin through 2017, thereby causing a massive spike in the currency’s respective value. Griffin affirms that Tether has the capability to both “stabilize and manipulate” bitcoin prices.

The Commodity Futures Trading Commission (CFTC) originally looked at the situation back in December, and even subpoenaed Tether following claims that it was somehow backed by a reserve of USD. These claims have not been confirmed, and Tether executives have denied any wrongdoing.

While conducting research, Griffin examined the largest bitcoin prices with Tether between March 2017 and March 2018. He noticed that new Tether had been issued within the prior three days, and that bitcoin’s price had fallen just an hour before. From there, serious gains were witnessed quickly, ultimately amounting to about 50 percent of bitcoin’s “compounded return” over the year.

“This behavior never occurs randomly,” Griffin stated, further explaining that bitcoin typically traded near certain price thresholds denominated in $500 increments. “Bitcoin purchases with Tether strongly increase just below multiples of 500. This pattern is only present in periods following printing of tether and not observed by other exchanges. To other investors, it gives the impression of a price floor, providing a signal for them to buy as well. If it was random behavior, you wouldn’t see it cluster around the thresholds. It indicates it’s a conscious strategy to provide price support.”