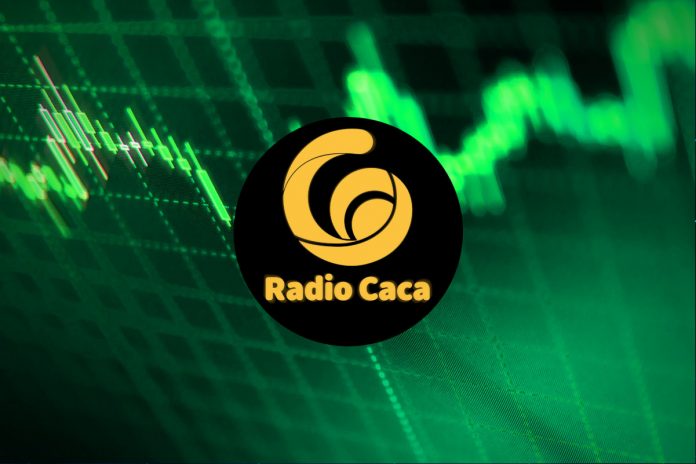 Rumors of a possible listing of Radio Caca (RACA) on Binance made the RACA token rise more than 20% this Sunday morning (USA), according to data from the CoinGecko portal. The cryptocurrency that had been trading around $0.0018 surged to $0.0021 in less than 1 hour, boosted by rumors. At the time of writing, the token has retreated to $0.0019, maintaining a 2% rally over the past 24 hours.

The anticipation of Radio Caca’s listing on Binance made not only the RACA token rise but also the number of searches for the cryptocurrency. According to data from the CoinGecko portal, in the last 24 hours, the cryptocurrencies that are in the “trending searches” are ApeCoin, GMT, and RACA. The same occurred in trading, with RACA in second place among the most traded currencies of the day, also according to data from CoinGecko.

The rumors emerged after Binance posted a guide on how users could buy RACA on its social media and the exchange’s official website. However, the Binance post highlights that, as of press time, the token is not available on Binance. However, on social media, users reported that this also occurred in the past with other cryptocurrencies that first gained a “guide” on the exchange’s blog and then were listed.

While Binance has not officially commented on a possible Radio Caca listing, users also noted that the post is followed by a button (shown below) that suggests users are already able to buy RACA on the exchange. Clicking on this button, however, does not allow you to buy RACA on the site currently.

Also, in the last seven days alone, some of the biggest cryptocurrency exchanges and service providers have announced the listing of RACA on their platforms due to the growth of Radio Caca and its ecosystems. Among the companies that have announced recent RACA listings are Huobi, ChangeNow, Bybit, and Phemex.

In the case of Huobi, from now on, the exchange’s clients can trade RACA at pair with USDT. Additionally, as part of the listing, Huobi is offering RACA staking under the company’s Huobi Earn program.

Another significant listing was RACA’s listing on ByBit, which also listed RACA on the USDT pair (RACA/USDT) and integrated the token into its staking program.

Also announcing support for RACA was the ChangeNOW crypto swap service, which allows the RACA token to be quickly exchanged for over 350 cryptocurrencies. Also, as part of the integration, the service announced zero fees for any exchange for seven days.

In Phemex, more than 2 million users of the Singapore-based exchange now have access to Radio Caca’s cryptocurrency trading on USDT pair (RACA-USDT). In addition, Radio CACA was also listed on one of the largest exchanges in Brazil, NovaDAX.

In another vital achievement for Radio Caca, NowPayments announced the purchase and sale of RACA in several fiat pairs such as EUR, RUB, USD, TRY, GBR, and UAH.

Fiat-to-$RACA or #RACA-to-Fiat — doesn't matter anymore because we’re here for you either way!💛

So let’s transform your business and enjoy the opportunities from both world!🌎🌐

Are you with us, #RadioCaca? More details in the article⤵️@RadioCacaNFThttps://t.co/WPuOw98DNi

Bulls are in control, and RACA increased by over 50%

In the last 30 days, RACA recorded an increase of more than 50% in the value. This impressive appreciation surpassed some of the leading cryptocurrencies on the market, such as Bitcoin, which rose by only 3% in the same period, and Ethereum, which was close to 20% up, according to data from Coinmarketcap.

The impressive appreciation of RACA was helped by various announcements that the Web 3.0 infrastructure and Metaverse tech team made during the month, which included partnerships with some of the largest universities in the world, such as Cambridge University, Istanbul Technical University, University of Hong Kong and Princeton Blockchain Society among others.

And recently, Radio Caca announced a great partnership with rapper French Montana, including several initiatives. Among them is the release of a 2D metaverse called 2D Montega Metaverse that will be inspired by Montana’s next album, Montega. The metaverse will be driven by Metamon NFTs included with the NFT album and will be play-to-earn. Additionally, acclaimed rapper and hottest entrepreneur in America, French Montana, will speak on NFT.NYC.

Analyzing Radio Caca’s charts and recent announcements, the Investors Observer analyst points out that the bulls are in charge, indicating that despite Bitcoin’s sideways movement, the RACA cryptocurrency has excellent chances of rising in the short term.

Disclosure: This is a sponsored press release. Please do your research before buying any Metaverse crypto coins.