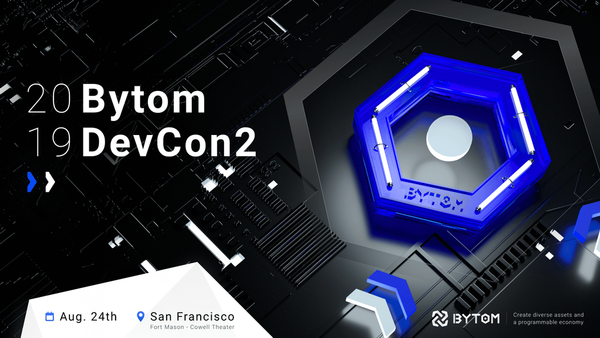 Bytom is a blockchain protocol as well as an interactive protocol made out of multiple byteassets. Its programmable economy is designed with a consensus algorithm that ensures its high intelligence and promotes its artificial intelligence technology. Bytom’s blockchain promotes flexibility, that ensure complete asset controls are provided, as well as independency, to enable users to customize their own smart contracts. Bytom also has a Digital Asset Atomic Transfer that is adaptable to a number of other cutting-edge blockchain ecosystems.

Other key development features on Bytom include:

Bytom’s second Global Developers Conference 2019 attracted over fifty teams from across the world including those registered from US, China, Russia, India, Belgium, Brazil, and Nigeria. Six of the overall winning teams took part in the demo conference.

The first DevCon was hosted last year (2018) in China. There, a variety of speakers attended the event at the Hangzhou International Expo Center, many of who were senior researchers and project founders who conducted presentations. Some of these speakers included Liu Quan (Chief Scientist of WBO World Blockchain Organization) and Sun Lilin (President of CCID Block Research Institute). The success of the 2018 DevCon paved the way for Bytom’s gradual development and growing influence in its ecosystem.

DevCon is the ultimate technology feast for blockchain developers. This year, a team from Canada named PayPaw, the developers of a BTM micropayment system, won the first prize of $30,000 in BTM token equivalent.

Recent updates surrounding Bytom and Bystack were shared by Founder and CEO of Bytom, Duan Xingxing. Duan expressed his drive to create the programmable economy, Bytom, as well as a digital asset internet that will support multiple other assets. He recently announced Bystack, a blockchain service platform with mainchain-sidechain design. The subsidiary outlet of Bytom is a gradual development and its roadmap of research is set to be released in the near future. Eventually, it will launch its own development center and a decentralized ID system.

Bystack’s blockchain protocol has received positive feedback from BBFT present Wei Wang for its high performance, claiming TPS up to 20,000 and just 0.6 seconds with a fork possibility of 0.27%. Additionally, CTO of MATPOOL – Bytom’s official mining pool – Lei Jen, spoke about MAAS (Mining as a Service).

At DevCon 2019 and outside of the Bytom and Bystack ecosystem, there were many other attendees who voiced their insights on the blockchain industry as a whole. Co-founder of Celer Network, Mo Dong, expressed in his speech a plan to promote blockchain through games that can be used by both amateur and experienced developers to easily create HTML 5. Other attendees also believed that for blockchain’s future potential mass adoption, games are the best selling point to gain more users — this included spokesperson, Nick White.

There were several panel discussions at the event surrounding insightful topics about blockchain’s trends and challenges, public blockchains, education and the limited understanding of blockchain, value creation in the digital asset industry and also panels about investments. Bytom’s annual conference continues to propel its goal of growing the popularity of blockchain technology and continue its deep research.

To learn more about Bytom, visit the website at https://bytom.io/.