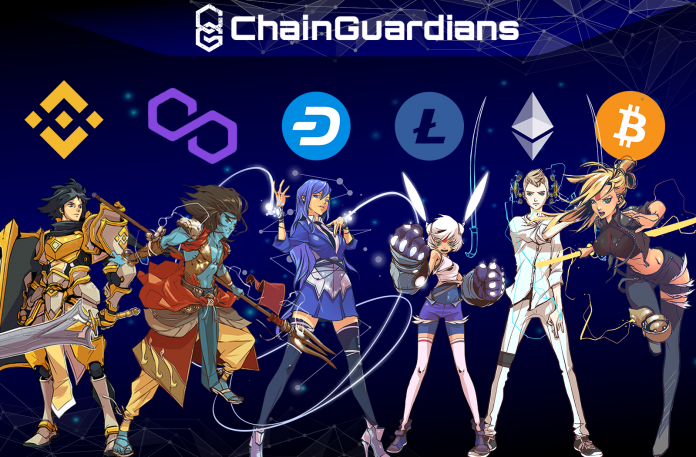 ChainGuardians is a platform that combines traditional gaming concepts with blockchain technology to enable player-driven economies. Players can participate in the free-to-play Non-Fungible Tokens (NFT) mining platform and role playing game; both of which allow players to earn income, turning their time and energy into tangible rewards.

The aim of ChainGuardians is to bring the NFT community an unprecedented gaming ecosystem founded upon competitive game play through chain analysis technology, advanced game economics which integrates players’ real life cryptocurrency and NFT holdings, and the experience of expandable and persistent multi- blockchain worlds.

ChainGuardians vision is to create some of the world’s most enjoyable blockchain gaming experiences by combining traditional gaming concepts with blockchain technology.

The ecosystem’s assets such as weapons and armour, Guardian and supporting characters, are digital collectables. These collectible assets are represented through unique ERC-721 NFTs on the Ethereum blockchain. This ensures the assets are one of a kind, preventing them from duplication or counterfeit. The collectible assets are of a limited quantity, ensuring they retain their scarcity and value within marketplaces. Users will have the option to buy and sell them initially on secondary NFT marketplaces.

ChainGuardians is a persistent multi-world turn-based real time strategy game that incorporates desirable rewards and transparent economies. Player rewards are driven by both player purchases and crypto infusions which occur as a result of partnerships with other game tokens and blockchains.

The ChainGuardians game is solely controlled by the player, and it is a battle based game which is active in real time. When players are not online, advanced AI based battles take place governed by a Guardians’ attributes. Players can ambush enemies at night or daylight. So the main purpose of the game is to loot and eradicate enemies. The game allows players to participate in Chain-Battles with other players to gain even bigger rewards.

The heroes of the ecosystem are known as guardians or ChainGuardians, who can join forces to take down opposing forces and the enemies; gatekeepers, in order to gain power, credits, armaments and powerful world artifacts. The guardians can conquer castles, fortresses and dungeons or establish campsites with defensive attributes.

ChainGuardians are the superheroes of the CryptoVerse and sworn protectors of their respective worlds. They champion the forefront of the battle against the Gatekeeper tyrant. Without their protection, the CryptoVerse would have fallen under the oppressive rule of the gatekeepers.

Guardians have twelve attributes, each with a maximum amount of points, all totaling to 100. These attributes are rarity, natural ability, armor and weapon score, magical item score, fame score, guardian skills, activity score and age. Guardian skills vary and are obtained from their journey. They are strength, intellect, stamina, charisma, and agility.

All characters in the ecosystem have uniqueness and in the NFT collecting circles, with enough scarcity, there could be a lot of value. The characters are in different categories, legendary, rare, uncommon and common. The characters can either be Guardians, Captains, Lieutenants, and Officers. The Guardians are Seth Buter, Bitsee, Dasha, Mudra, Hiro, Lolita Lee, and Binancio. There is also a hierarchy, which means, Guardians are always Legendaries, Captains and Lieutenants are legendary, rare or uncommon, Officers are either rare, common or uncommon.

The ChainGuardians battle based games are active in real time and are solely controlled by the player. When players are not online, advanced AI based battles take place governed on the Guardians’ attributes. Players can ambush enemies at night or during the day. So the main purpose of the game is to loot and eradicate enemies. The games allow players to participate in Chain-Battles with other players to gain even bigger rewards.

Anyone that holds gate portal access cards (an ERC-721) will be able to participate in the world creation events or during cataclysms. During these seeding events that occur throughout the CryptoVerse, energy Forces are extracted from the worlds. This allows players that hold a gate portal access card to draw energy Forces from their alternate universe Crypto holdings. Players that hold cryptocurrencies stipulated by the developers are also rewarded. The Powerful Force Amplification Artifacts provides 2x, 3x, and even 5x energy duplication.

The idea of ‘Pay to Win’ has been a big problem in many of the prominent games today. These tactics often hinder the entry of newer players and limits the game from reaching its full potential. Moreover, many of the blockchain games have unique ideas, yet many are unable to achieve their mission. ChainGuardians has created a platform with multiple game modes and balanced guardians and other characters such that players are entertained and have the opportunity to win.

The ChainGuardians platform is continuously looking to develop its in-game experiences so that more crypto-enthusiasts and anime-lovers can join hand in hand in the crypto world. Recent developments and partnerships are all focused in creating a better experience for the players.