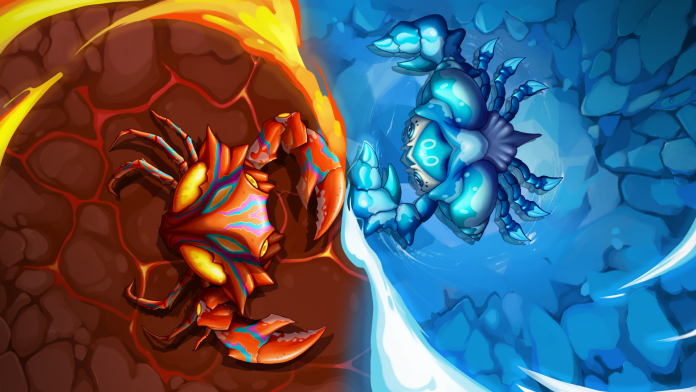 In the first part of this series we began our journey into CryptantCrab land and familiarized ourselves with all the mechanics. In this part, we are going to talk a bit more about Crab attributes, we will mutate and xenograft a crab of our own, and talk a bit more about the Arena and the rewards that you can get. Without further ado, let’s get it.

What are Crab Attributes?

Each crab has 4 body parts, each having their own attribute. Each attribute has a name, an element and some stats. There are five elements: Fire, Earth, Metal, Spirit, and Water. Each element has a strength against 2 other elements and a weakness 2 other elements. See the chart below:

Your crab has different body parts that each have their own element. There is a set bonus that if your crab has 4 of the same bodyparts with the same element and name you get 30% extra resistance to all elements, giving you a nice edge in battle. Winning more means getting more EXP which in turn will make your crab even stronger.

There are two ways to get your crab to have the parts you want. You can either xenograft your crab or mutate a certain part. Xenografting is taking a part from an existing crab and grafting it onto a different crab.

In our case, we have one crab that has 2 bodyparts of the same name and element, now that we have 1 Cryptant, we can mutate a different body part to see if we can get the same type. 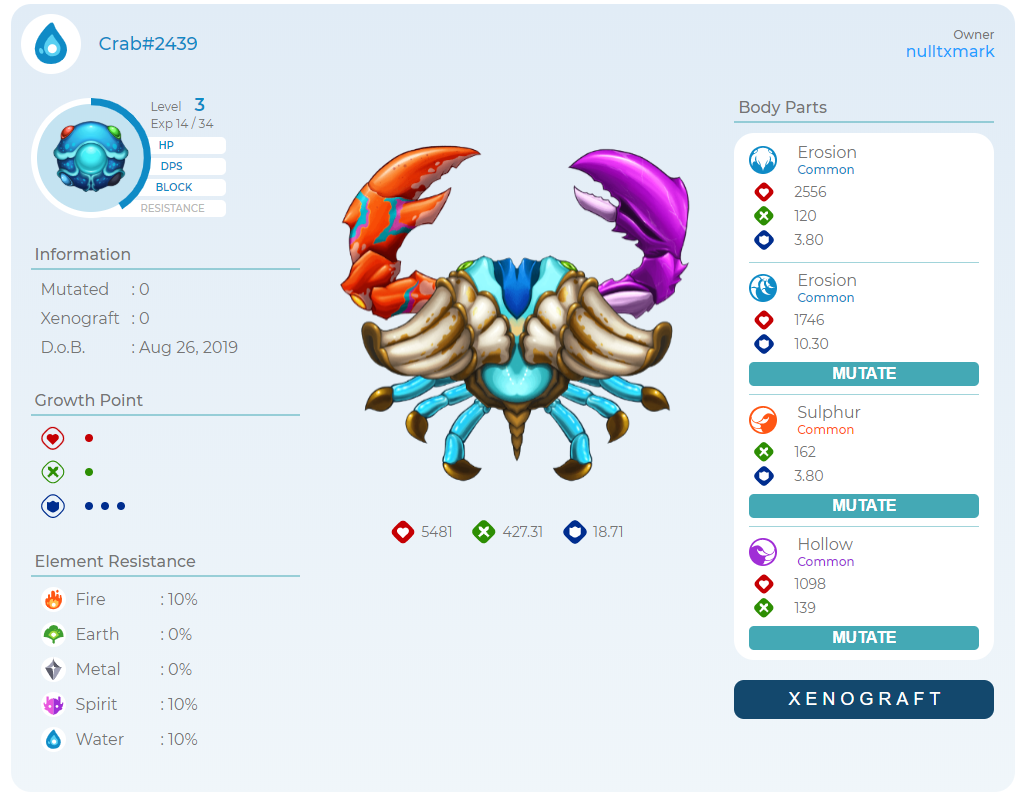 As you can see, we have two Erosion parts. We can try mutating either of the other parts to roll the dice. I’m going to mutate the Hollow part and see what happens. 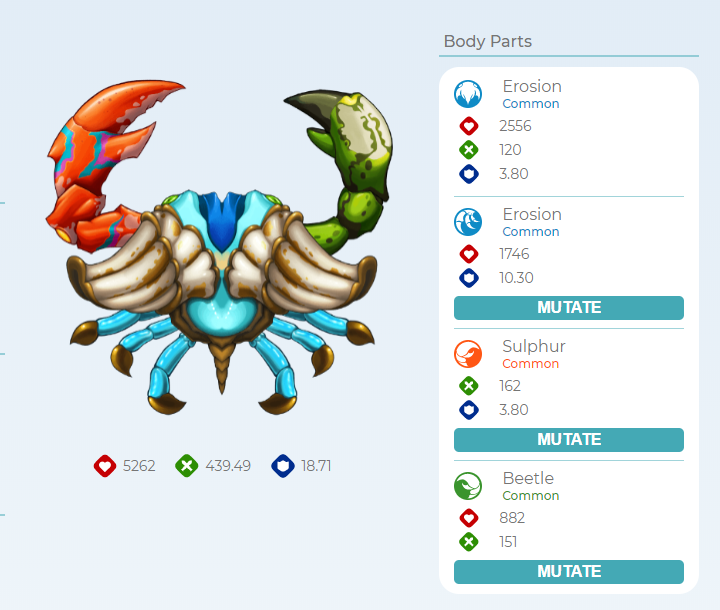 Unfortunately we didn’t get an Erosion part. Instead, we got a common Beetle part. However, if you compare the stats of our crab now, you can see he gained some DPS at the expense of Health. Whether that was a good trade is hard to tell. The crab also received 8 EXP for the mutation, so it’s not a total waste.

In order to complete this Erosion set, we are missing an Erosion left and right claw. Luckily, we have a crab that has Erosion in his left claw, this is where Xenografting comes in. We can take that left claw and transplant it to our original crab, thereby ending up with 3 Erosion parts and that much closer to a full set. 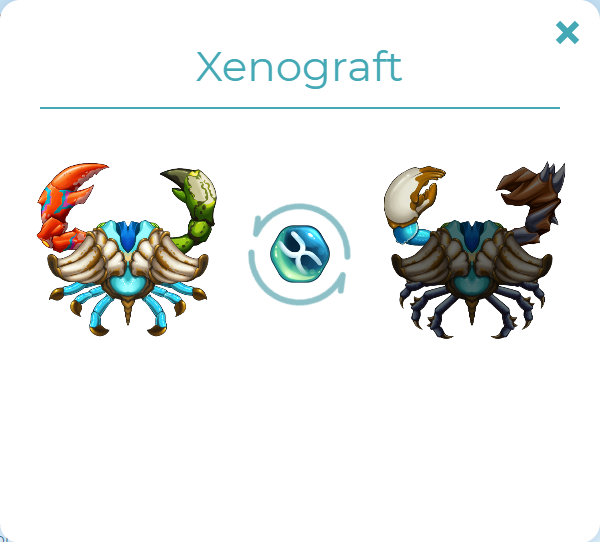 Once the Xenograft is done, the crab we took the left claw from will turn into a fossil. While a fossil can’t be used to battle with, it can be equipped to another crab in order to strengthen its powers.

Since I wanted to complete the full set crab, I ended up purchasing a crab with the right claw erosion part and Xenograft that one as well. In total I spent $60 for the crab and purchasing Cryptant for the 2 Xenografts. 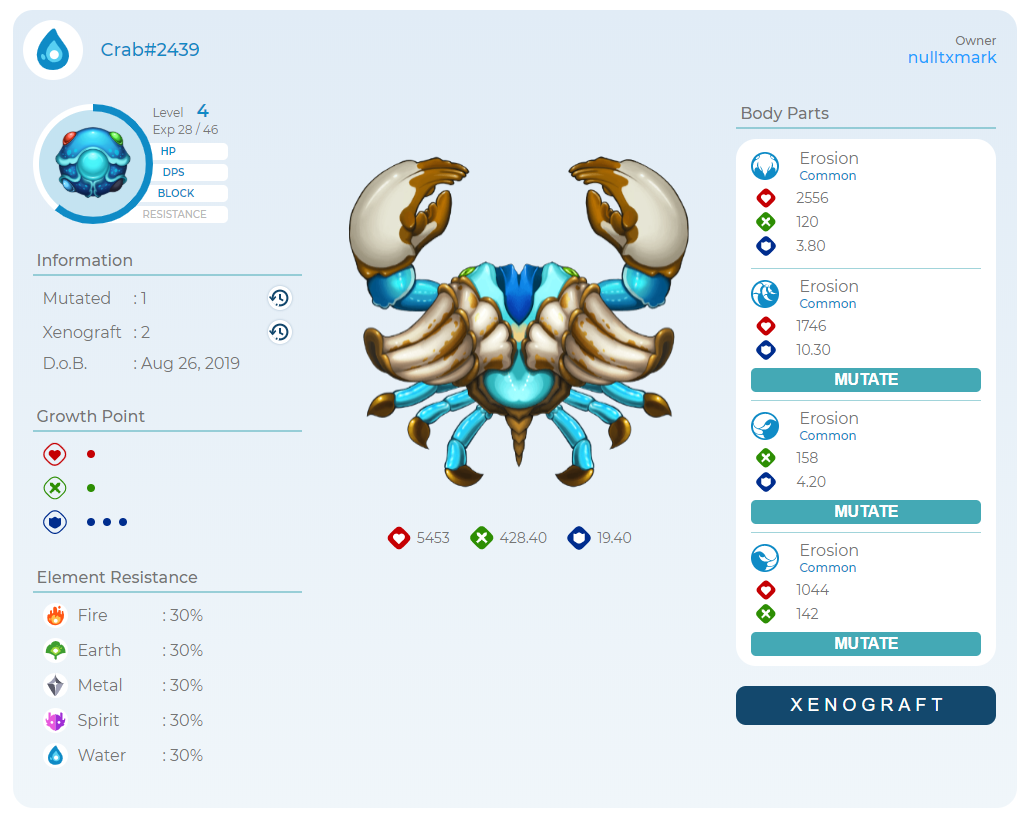 After all is said and done we ended up with our first full set crab. By completing the set we now receive 30% resistance to all elements, which should really give the crab an advantage on the battlefield.

Our new crab team for the Arena now looks a lot better. We have a team with a full set crab with 2 fossils that give it extra defense and attack. Our second team is not that great but the crabs are rising in levels which will also help them win more.

One more thing to consider is the point system in the Arena. The points come from the amount of wins you do each battle. Only the top 50 scores for all the battles you did during the current Arena period are recorded. Since the most wins you can get per battle is 20, the most points you can have in the arena is 1000. That’s why the top 2 ranked players have 1000 points.

This means that having more crab teams won’t necessarily help you with getting a higher arena score. If you simply have 2 extremely strong crabs that’s worth more than having 10 or even 20 weak ones.

The benefit of ranking high in the Arena include prizes such as Cryptants, Crabs and Crab Tokens. The higher your rank the better the prize, even if you simply make it to the top 50 you get 2.3 Cryptant.

Even though I have a full set crab, that by itself might not be enough to get into the top 50, at least not this round. In the meantime I will continue sending my crabs to battle and every time I have 1 Cryptant, I will mutate a part of another crab to see if we can get lucky.

The team behind CryptantCrab was kind enough to sponsor a giveaway of 20 Crabs. We will be running this giveaway for 2 weeks, at the end of which we will select 20 winners each to receive 1 Crab.

To enter the giveaway join our Discord channel and react to the post in our giveaways channel. We will announce the winners on September 12th.

If you want to join me on this journey, you can sign up to CryptantCrabs here.