It’s been about a month since my last CryptantCrab let’s play and it’s time for another part as I’ve learned quite a bit by battling in the Arena and scoring higher and higher each round. In this part, I will talk about some tips and tricks to help you score higher in the Arena. Without further ado, let’s get started.

This sounds like a pretty obvious tip, but this is one of the most important ways to get an optimal score in the Arena. If you forget to send your crabs to fight and let them overflow with stamina, you are effectively losing points by not maximizing the amount of battles your crabs can do in that period of time.

Since it takes your crab a full 24 hours to regenerate 6 stamina, checking on your crabs once every 12 hours should be more than plenty to maximize the amount of battles they fight. It’s also not hard to login to CryptantCrab twice a day for ten seconds to send your crabs to battle.

Usually a few hours before an arena round ends, you can already tell what rank you will get along with the reward. Let’s say you are ranked at number 24 a few hours before an arena round ends. Even if someone passes you and you end up rank 25, you will still get the same reward. As a result, it’s best to save that stamina for the next arena round so you have more of a chance to get a higher score that will reward better prizes.

That may sound like a lot to some of you, but if you want those high arena score you should invest in some crabs and have at least 4 teams. The more teams the better, but after 4 teams you get diminishing returns. Even if you have weak crabs, send them to battle because you never know, sometimes you can win 10+ games even with level 1 crabs.

I tried playing with only 2 teams of strong crabs, and didn’t do well in the arena at all. However, when I purchased 4 more average crabs I was able to score a lot higher.

Full set crabs are much cheaper and easier to get than legendary crabs. Moreover, a common full set crab is actually much better than a crab with one or even two legendary parts. Full set crabs give you an amazing bonus of 30% resistance to all elements which really swings the odds in your favor when battling other non full-set crabs.

Each crab has a certain amount of growth points. Those are denoted by the red, blue and green dots on each crab. 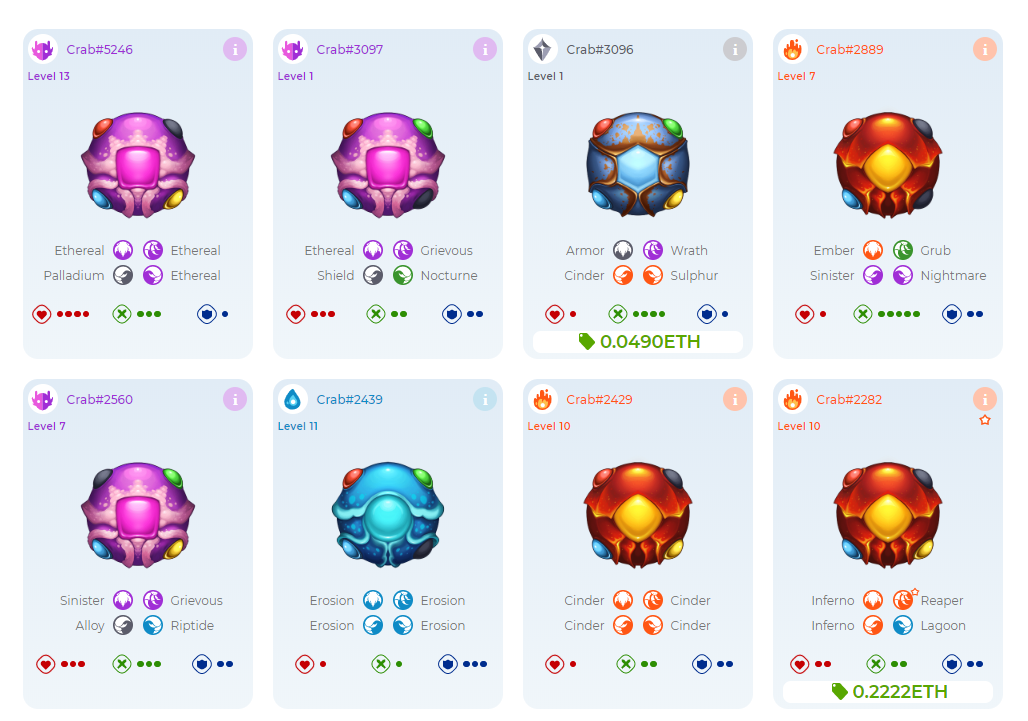 As you can see from the picture above, each crab has a different distribution and amount of GPs. The highest you can go is 8GP, there are some 9GP crabs but those are special and cannot be obtained by simply hatching a crab.

The importance of having a high GP, is that when the crab gets to a higher level (10+), it grows much more each level than a lower GP crab. That means that a LVL 10 8GP crab, can easily take on a LVL 12 6GP crab. Moreover, it’s not that hard to find 8GP crabs as they are not that expensive on the market.

This is another obvious tip, but many forget not only to add fossils but the fact that you can reuse them. You only need 4 fossils because you can reuse the same ones for your other teams. Fossils together provide a roughly 10% increase in different stats that can really help give you the edge to gain a few arena spots.

There are also ghost fossils, but those only last for a few days and you can get them if you get lucky in the Arena. If you do get a ghost fossil make sure to match it with a crab of the same element as it double’s its effectiveness.

Anybody can challenge a player that have over 500 points for the current arena round. If you challenge someone, it will use up 3 stamina rather than 1. If you end up winning, you will get the opponent’s two highest arena scores and make them your own. Challenging players is one way to get ahead in the arena, but I personally haven’t challenged too many people.

Usually, you will have a lot more people challenge you towards the end of an arena round, because if the players’ rank is towards the top of their prize range, getting those few extra points can make a big difference. Moreover, if a player has only slightly more points than you and the arena is about to end, it might be a good idea to challenge him in order to claim a higher spot.

Currently I’ve been ranking in the top 25 arena spot with relative ease. My goal is to make it to the top 20 at least once. I do have 5 crab teams with a few full set crabs. From experience, it seems a lot easier to work on common full set crabs than to deal with legendary parts. Not only are legendary parts extremely rare, but if you want to make a full set and decide to Xenograft the legendary crab, it’s going to cost an arm and a leg searching and buying the required parts from the market.

CryptantCrab does require an investment to make it into the top 50, but you could do it with under $100. Moreover, if you ever get tired of playing CryptantCrab you can always sell your crabs and make some of your money back.