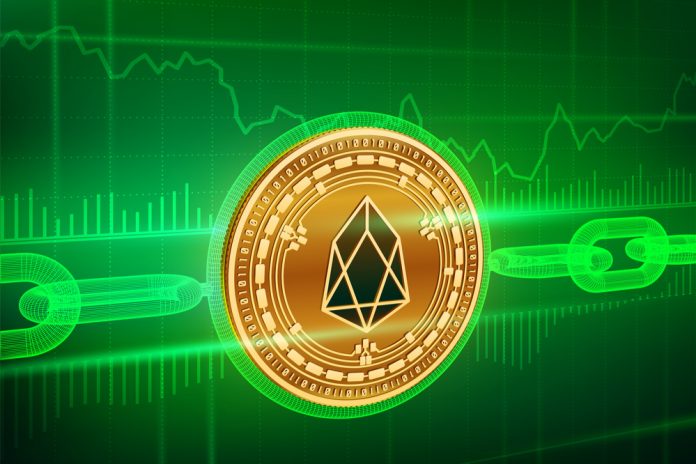 The crypto market has experienced a turnaround after weeks of instability that saw many of the cryptos shed billions in market capitalization. The turnaround has been attributed to a number of factors, top among them being the announcement by the world’s largest asset manager, BlackRock, that it was exploring the possibility of venturing into the crypto market. EOS, in particular, has experienced steady gains. At press time, it was trading at just over $8, and its market cap had risen by $1 billion in just 24 hours. The turnaround coincides with an announcement by the company behind EOS, Block.one, that it had secured investments from renowned billionaire investor Peter Thiel and the crypto mining hardware magnate Jihan Wu.

The Crypto That Everyone Wants a Part Of

EOS was trading at $8.08 at press time, an increase of 9 percent in the previous 24 hours. Among the top 20 cryptos, only Bitcoin Cash, with an increase of 10.2 percent, boasted a bigger increase. Just three days ago, the EOS price had fallen as low as $6.7, its lowest price since mid-April. Its market cap has also seen a tremendous rise, moving from $6 billion three days ago to over $7.2 billion. Its position as the world’s fifth-most valuable crypto is still intact.

The rise in the price of EOS comes as its parent company, Block.one, announced that it had closed a strategic investment round led by billionaire investor and PayPal co-founder Peter Thiel. Thiel is one of the world’s most respected tech investors, having been among the first investors in Facebook and currently sitting on its board. He has also made investments in Airbnb, Palantir, and LinkedIn. The investment round also saw participation from Jihan Wu, the co-founder of the world’s largest crypto mining hardware manufacturer, Bitmain, as well as British hedge fund manager Alan Howard.

Wu was full of praise for the EOSIO protocol:

The EOSIO protocol is a great example of blockchain innovation. Its performance and scalability can meet the needs of demanding consumer applications and will pave the way for mainstream blockchain adoption.

Despite tumbling from its record high of $21 to just over $6, EOS has had an incredible year. It set a new record for the amount raised in an initial coin offering after its year-long ICO raised over $4 billion, breaking the previous record held by Telegram that stood at $1.7 billion. Promising to rival Ethereum as the smart contracts and decentralized applications network of choice, EOS has enjoyed a rapid rise to the top. The rise hasn’t been without its share of controversy and challenges, however. EOS has been accused of deliberately attacking the Ethereum network as it seeks to snatch a share of the growing smart contracts industry.

EOS CTO Dan Larimer dismissed those claims as stupid and a waste of time for Block.one.

I can assure you block one wouldn’t be so stupid to spend our resources attacking eth when all it takes is crypto kitties. There are far smarter and more cost-effective ways at bringing eth down if that were the goal.