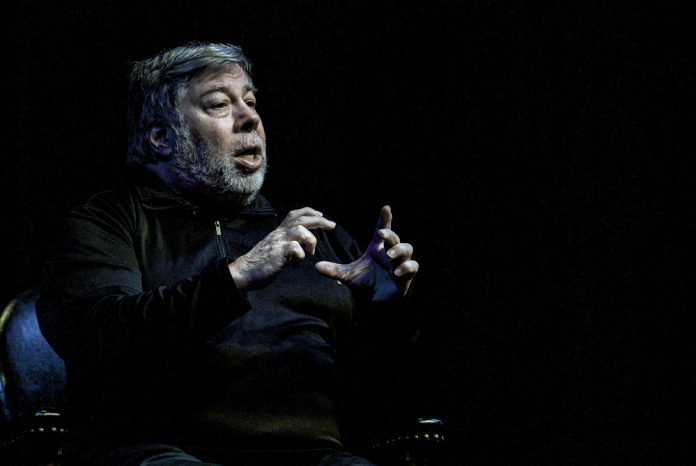 Steve Wozniak, co-founder of Apple, is a computer engineer and inventor responsible for the creation of the Apple I computer as well as a primary contributor to the Apple II. He played arguably the biggest role in the personal computer revolution, and is a forefather of the third technological revolution, which ushered in the era of computing and the internet.

Wozniak worked with Steve Jobs primarily from 1976 to 1981, and stepped away from Apple for good in 1985. Since then, Wozniak has taken up a number of philanthropic and technological initiatives. Following his departure from Apple, he invented the first universal remote, taught technology in K-12 schools, hosted several rock concerts, finished his bachelor’s degree at UC Berkeley, and so much more.

Recently, at the ChainXchange blockchain convention, I had an opportunity to interview Wozniak about cryptocurrency. The conversation began with Wozniak’s instant fascination with Bitcoin.

“I like to keep up with things… Bitcoin caught my attention. It had so many unusual aspects for any technology I had ever heard of. Nobody is really known to be the creator. It doesn’t have any centralized [component]. It’s based on mathematics. There’s a certain number of Bitcoin that can ever exist… Mathematics to me is like nature. It’s much better than human beings… I trust those things of nature more than what man makes up. Man makes up currencies, controls them, issues new US dollars every year; Bitcoin was immune to that.”

From there, his curiosity turned towards the underlying blockchain technology.

“At first I kept hearing [about blockchain], and I didn’t understand it. It’s not something you understand in a day. You think about it, read more about it and how it works, and then you see how people actually start to use it, through the mining process and also the verification and, aha! It all adds up!” said Wozniak, before reflecting on early conceptions of crypto.

“It’s so independent! It’s kind of like the internet when it was brand new… I was amazed at the technology behind it. People start up companies that do other things in life. I’ve encountered people working in real estate avenues, types of Uber systems, everything we’ve got in our life, especially involving transactions – retail sales, car sales, manufacturing of goods… working on Bitcoin applications… and they all have value. Every single one you hear about, to me, has value…. A few people can see the value, which reminds me very much of the early internet days.”

After, Wozniak revealed incredible news: he is about to begin working with blockchain for the first time.

“I’m involved with, very soon, my first time being involved in a blockchain company. [It’s] called Equi… Our approach is not like a new currency, or something phony where an event will make it go up in value. It’s a share of stock, in a company. This company is doing investment by investors with huge track records in good investments in things like apartment buildings in Dubai. We have one person in our group who has listed out a whole apartment building for Bitcoin… We might be starting up in Malta around the time of their blockchain conference. Some countries are very positive about [blockchain] the same way they were about electric vehicles.”

Wozniak concluded the discussion by explaining his stance on platforms like Ethereum. He sees use of Ethereum similar to that seen on Apple, with thousands of companies developing their own applications on the platform. “Ethereum provides the tools for a blockchain application of your own… I see more people using Ethereum that way, but Bitcoin is still digital gold.”

For those interested in starting their own business and follow in Wozniak’s footsteps, starting an LLC is a great first step. There are many different online resources on how to set up your own LLC in Texas, check out moneybrighter for some simple tips on how to do so.