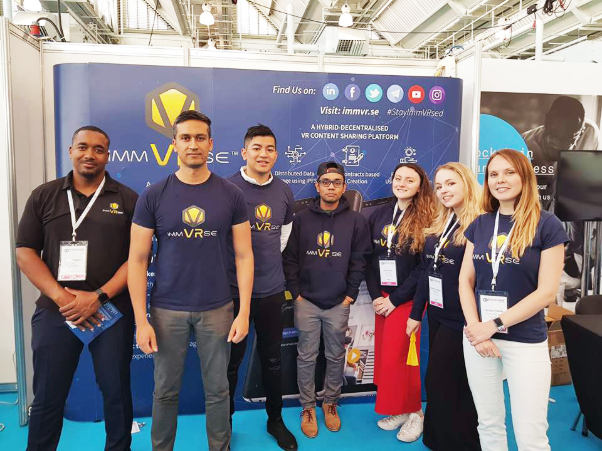 ImmVRse has distinguished itself in the blockchain sphere through a string of watershed moments and milestone accomplishments, including a recently concluded private sale. However, it was the event which took place in Olympia London  from 26th and 27th June that left a long lasting impression on the crypto community, making waves long afterwards.

ImmVRse’s showcase at Blockchain Summit, Olympia, London, was a two days jaunt into the vibrant world of VR, affording participants the unique and exciting opportunity to explore the latest VR offering on the popular Oculus Rift – a VR headset created by Oculus VR, a subsidiary of Facebook Inc.

The London Blockchain Summit is visited by an annual 1.5 million attendees, who build upon their knowledge of blockchain and seek out prospective development presented by visionary speakers, groundbreaking case studies, networking sessions and hands-on display. The summit enables developers, investors, businesses, organizations, and the community to rub minds on issues and try out solutions.

This year’s event, held from the 26th to the 27th June, had ImmVRse as one of the sponsors and exhibitioners. The company’s CEO, Farabi Shayor – who is currently leading an R&D experiment on VR’s impact in neuroscience with a small team from Imperial College London – spoke at the event saying :

“ImmVRse will be the platform to bring all such content together and help showcase them to the world. Blockchain provides many benefits for our users including, gamification, rewards for participating, safe and efficient transactions between all stakeholder and copyright infringement.”

ImmVRse’s presence at the summit offered the Olympia audience a unique and unparalleled insight into the untapped potentials of Virtual Reality technology and the technology it affords businesses and content creators. VR is currently revolutionizing how services and contents are delivered across a wide range of  industries including healthcare, filmmaking, gaming, and education.

During the event, ImmVRse was able to prove the growing acceptance of VR technology as several companies from diverse sectors expressed interest for how to fuse the platform’s innovation into their products and services. ImmVRse was also able to demonstrate how it can add quality to the rapidly growing VR content market.

“One of the key messages I have been advocating is the importance of VR content” says COO and Co-founder Limon Rahman. “The industry has been going through an exciting period of growth and speculation in the past 12 months,”

The growing VR market is booming with several companies tapping into the markets, leveraging the technology to offer and enhance solutions in the educational, gaming, entertainment, and manufacturing sector. However, ImmVRse is finally giving these solutions a transparent, immutable, secure, and rewarding platform to develop through blockchain technology.

“Numerous headlining snippets of news have been appearing on mainstream media. For instance, Google and AliBaba investing $1.4billion into Magic Leap to develop a head-mounted virtual retinal display and Spielberg bringing VR to the big screen with his movie, Ready Player One.”

For further details and to register now, please visit: https://ico.immvr.se/user/login