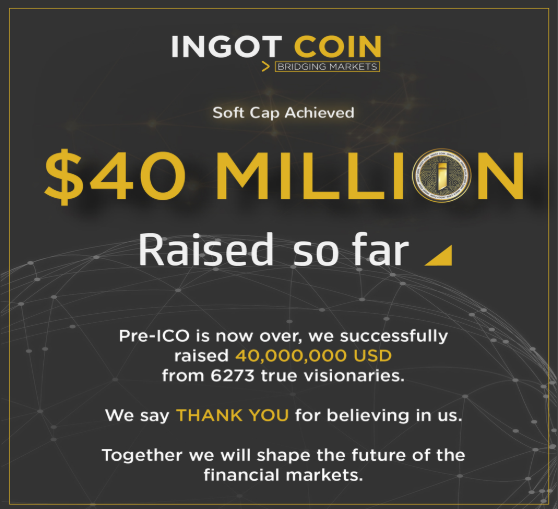 INGOT Coin is a startup aiming to create an unprecedented, first-of-its-kind, revolutionary, ecosystem based on blockchain technology. The team recently announced the achievement of their soft cap goal, raising $40,000,000 USD, resulting in the completion of the pre-token generation event.

Since the initial startup, INGOT Coin have been working hard to achieve their goal. Now, they have proudly announced the collection of a successful soft cap, receiving $40,000,000 USD so far, increasingly growing closer to shaping the future of the financial market. The INGOT coin team are next aiming to achieve the hard cap goal, with a further aim to become one of the top ten cryptocurrencies worldwide through accelerating the ecosystem development and spreading the vision global.

The successful results were encouraged by the ongoing support from contributors and believers, gaining vast amounts of response and trust for the project. Meanwhile, the INGOT Team are working to expand further, reaching out to larger audiences and achieving the next goal (hard cap), amongst having numerous existing partnerships  – Trade.io, GMEX Group, MFCHAIN, Swachhcoin, Xchain, ICO HOLDER, Coin Traffic, Zichain, Place Torrent, bolttcoin, hackernoon, Stella, and Bineuro.

The ecosystem will link newly developed crypto markets with the current financial markets. Using the systematics of blockchain technology, INGOT Coin’s system will be able to eliminate inefficiencies, whilst maintaining an atmosphere where participants are able to perform and execute transactions accordingly.

“The IC Ecosystem will transform trades, settlements and payments and make them instant, bringing together different necessary components and cutting out third party intermediaries who usually delay the process and increase associated costs.” INGOT.COIN

INGOT.Coin’s vision is to create an integrated community filled with secure and beneficial experiences for every member and partaker. The ecosystem revolves around trust and cooperation, working together within one place reflecting an industry of honesty and transparency.

“At INGOT, we believe that it is the right of all people to seize control of their lives; whether personally, socially, or financially.” – INGOT.COIN

What’s The Real Reason Behind INGOT.Coin?

The official website states that INGOT.Coin want people to join them into building a slave-free world. There is a real cause behind their motives, with true intention to wanting to help others.

“According to the United Nations High Commissioner for Human Rights, there are an estimated 27 million people suffering from modern slavery around the world. Modern slavery is about the exploitation and subjugation of other people, such as child slavery, forced labor, human trafficking, and labor exploitation. A common characteristic of modern slavery and the various forms it takes is that it involves the deprivation of someone’s freedom by another. In the context of business, an employee is no longer working willingly for the employer, but is rather ‘forced’ to do so. Essentially, people suffering from modern slavery are in a way or another ‘owned’ by their employers. Victims face verbal or physical abuse, and many times it so happens that they are tormented by both.”

INGOT.Coin take pride in fighting all forms of modern slavery, building a community where no one is treated inappropriately or unprofessionally, and feel safe in a cheerful, close, and comfortable environment.

With the overwhelming success of receiving $40,000,000 USD (so far) from 6273 true visionaries, INGOT Coin are expected to reach the hard cap goal. They are always reaching for the stars, and will soon be dominating them. To help greater the chance of accelerating the development, and spread INGOT’s vision globally, become a backer of INGOT Coin’s public token sale and have access to IC’s all-inclusive Ecosystem. The Ingot Coin token sale is live now and ends on 11th August 2018.