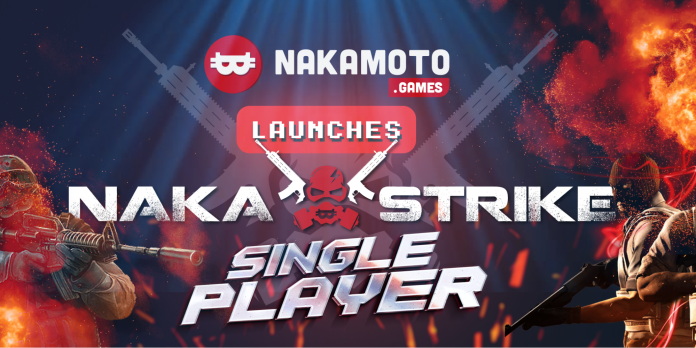 Since its launch, NAKA Strike has become a viral sensation and has attracted countless new players from all around the world. The game combines exciting, fast-paced, and interactive gameplay with the lucrative play-to-earn rewards system of the Nakamoto Games platform. These features – combined with the exceptional tournament challenge of NAKA Strike– have generated massive amounts of attention in blockchain gaming and play-to-earn circles.

With regards to the new release, NAKA Strike players can now fight against advanced AI-trained bots while still vying for NAKA rewards. There is no longer any need to fight alongside anyone else and players can log in and start their campaigns whenever they want.

Nakamoto Games CEO Tor discussed the new release and said: “We are ecstatic at the success of NAKA Strike and are humbled by the reception of the game and the outpouring of support for the multiplayer version of the game. We wanted to thank our players and have developed a single-person version of the game that retains all the excitement and thrills of the multiplayer version while retaining the play-to-earn benefits of the original. We are sure that our players will love this new release and are steadily adding new games, features, and benefits to our community over the weeks and months to come.”

Nakamoto Games is building the premier play-to-earn ecosystem that gives anyone with an internet connection the opportunity to earn cryptocurrency and generate a sustainable source of income by playing fun, interactive, and highly engaging blockchain-based games. Players benefit by earning for playing games they enjoy, and developers can use platform services and resources to launch, market, grow, and monetize their play-to-earn games to new and existing audiences. Learn more by reading the project lite paper or by visiting https://nakamoto.games/.