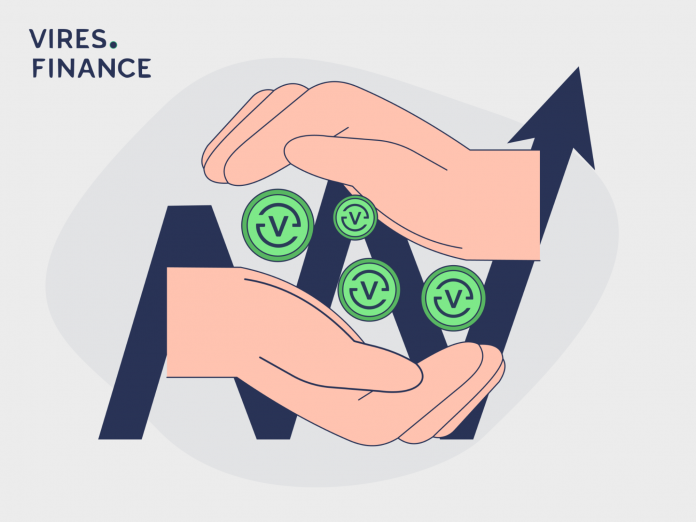 DeFi has been the most effective application of blockchain mechanics so far. The stupendous explosion of wealth and movement of institutional players into DeFi is occurring at a grand sweep. However, interaction with the king of DeFi protocols, Ethereum, is hard. It’s expensive, congested, and can render mobile DeFi strategies off-limits to anyone except the already moneyed crypto elite.

Up steps Vires. Fittingly, the Latin for power, seeks to redress that. By utilizing the low latency, high-security, and low-cost of the Waves blockchain, Vires can offer a DeFi protocol that puts more of the rewards from lending and borrowing into the hands of the most important people, its users, giving them the power to take their place in the new crypto hegemon.

How Does Vires Work?

Users can borrow from the Vires protocol in an over-collateralized manner. They can do this to free up capital to engage in yield farming. Users can use the capital either on the Waves blockchain or on other ecosystems to maximize their strategy and invest in new opportunities as they arise without losing exposure to their underlying assets.

Loans do not have to be taken in the same asset posted as collateral, and a deposit of $BTC could be made, for example, to get $USDN.

The available currencies so far are $BTC, $ETH, $USDT, and $USDC, as well as native Waves tokens like $USDN, $EURN, $WAVES, and $VIRES itself. When users return the loan, they also pay interest, which is distributed to holders and stakers of $VIRES in a mixed revenue basket.

This is how suppliers of cryptos to be lent out are rewarded for providing liquidity. The APY on the Vires protocol is far higher than the usual market rate and is supplemented by further yield paid to holders of $VIRES and $WAVES as they are integrated within the wider Waves ecosystem.

This APY varies depending on asset demand, of course. The protocol modulates the APY in reaction to the demand for borrowing a particular asset. Right now, the APY for $USDN – the stablecoin of the Neutrino Protocol, is 24.64%, with users paying 28.99% to borrow.

Vires started 2022 with an outline of their three-stage roadmap, stage one of which, the launch of the Vires DAO and staking and governance rewards, is already live. The first role of the DAO will be to vote on which assets to add to the Vires protocol for lending and borrowing.

The early months of the protocol have been successful in amassing over $600m in liquidity with a fairly narrow token set. The DAO’s ability to choose and implement the right tokens being added going forward will play a crucial role in determining whether Vires Finance can continue its rapid ascent.

Further improvements in the pipeline include integration with metamask and, crucially, a bridge to other networks like Polygon and Solana. Vires will also be launching its own stablecoin, ViresUSD, to help add lubrication to the ecosystem.

Vires Finance is a protocol that showcases the power of the Waves blockchain to power up market-beating APY to its suppliers while also letting its borrowers have a swift, integrated and cheap access to capital that can be deployed in Web 3.0.

Although it’s early days for the protocol, its fast success and generous reward systems and tokenomics means it, and its DAO, are ready to march into 2022 and take them all on.