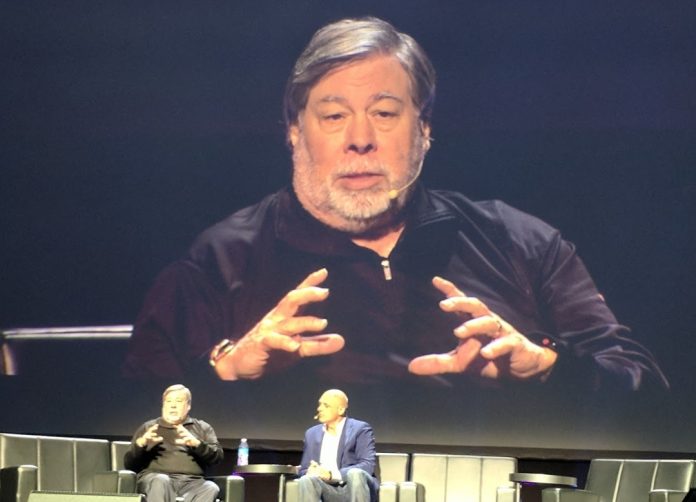 Wednesday, August 15 marked the final day of the ChainXchange blockchain convention and conclusion of the main event of the first ever Las Vegas blockchain week. Fortunately, the convention did not end without a remarkable finale, as Apple co-founder Steve Wozniak and the inspiration behind “Molly’s Game” Molly Bloom gave presentations before joining Tone Vays, Dr. Matthew Lange, and Tony DiMatteo to talk blockchain and the technological revolution.

Wozniak passionately shared the story about how his fascination of creating computers (which began at age 8) grew into his role as the creator of the first Apple computer and role as co-founder of Apple. While mostly civil, he made some jabs at Steve Jobs, stating, “That [Steve Jobs] movie, where he came down to the basement and I was coding in the dark, that’s not what happened. I was a king at the [computer engineer] club. He had never been there!” Wozniak has held a paramount importance in pursuing and learning about technology and ideas that fascinate him. Now, he is turning his attention towards blockchain.

Bloom shared the story of her past- her rise to prominence in underground poker and her fall from grace. She even included the names of two celebrities involved in her poker games: Ben Affleck and Leonardo DiCaprio. Following her story, she shared the reflections and insights on the journey, explaining how she had been entirely focused on herself, which fueled her loneliness. This next time around, Molly plans to focus on efforts that go beyond her, that make the lives of others better. From there, she turned her attention to blockchain, “I see blockchain as a brave new world, for transparency and accountability against monopoly and corruption… I want to be a part of that.”

The two were then joined by Lottery.com CEO Tony DiMatteo, food science and technology expert Dr. Matthew Lange, and prominent Bitcoin trader and educator Tone Vays to discuss everything from artificial intelligence to personal philosophy. All five see a remarkable impact of Bitcoin and blockchain in the future, with the exception of Tone Vays, who remains skeptical on blockchain integration beyond the use of Bitcoin.

They shared words of wisdom. Molly Bloom highlighted the importance of meditating and self-work to find yourself before taking on larger initiatives. Vays insisted on maintaining privacy. Wozniak’s words concluded the discussion. He explained his philosophy that happiness is the point of life, which he has boiled down to the equation H = F^3, where H represents happiness and F cubed stands for food, friends, and fun. He followed up his equation with simple advice, “Do the things that make you happy.”

Earlier in the day, cryptocurrency entrepreneur Michael Terpin (who had filed a US$223 million lawsuit against AT&T that morning), lawyer and philanthropist Robert Shapiro, healthcare angel investor Mary Jo Potter, and Wala CEO Trisha Martinez approached the implications for blockchain across different industries. Terpin spoke in regards to sustainability, Shapiro law, Potter healthcare, and Martinez the global unbanked. With the exception of Shapiro, who is still skeptical of the immutability aspects of blockchain in law, all expressed very optimistic outcomes for the technology in respective fields.

Day three marks the conclusion of ChainXchange. Throughout the convention, the following themes resonated: