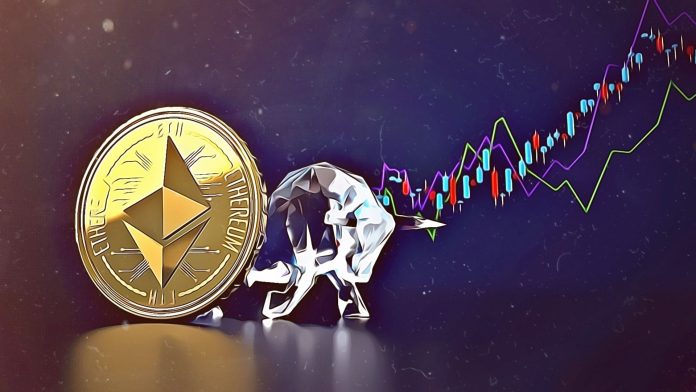 Ethereum price continues to outperform Bitcoin daily, rising by over 15% this week and today, overtaking Bitcoin’s 50% market capitalization. After testing support on Friday, Bitcoin and Ethereum continue their bull run breaking monthly highs. BTC dominance continues to drop, with some of the lowest levels seen since January 2022.

This market cap milestone is a significant achievement for ETH in its attempt to overtake Bitcoin in what’s dubbed “The Flippening.”

As the leading smart contracts platform, it is no surprise that the market is leaning towards Ethereum. Moreover, the upcoming network merge scheduled in September is approaching rapidly and is fueling what’s dubbed the “merge trade” for ETH. Traders expect Ethereum to rise significantly as the network merge date approaches, making ETHUSD a must-watch in August and September 2022.

Ethereum will likely continue its bullish momentum and test the $2k range next week. Some critical milestones for ETHUSD remain the three-month high of $2.1k and the increase to 25% dominance.

In other news, after the U.S. Treasury sanctioned Tornado Cash on August 8th, a cryptocurrency mixer, one of its developers, was arrested in Amsterdam. According to Netherland authorities, the developer

According to an official press release from FIOD, a financial crimes investigative agency based in the Netherlands:

“On Wednesday, 10 August, the FIOD arrested a 29-year-old man in Amsterdam. He is suspected of involvement in concealing criminal financial flows and facilitating money laundering through the mixing of cryptocurrencies through the decentralized Ethereum mixing service Tornado Cash.”

Tornado Cash also has its cryptocurrency called TORN, which has seen a substantial decline in value over the past week. TORN dropped from a high of $30 to a low of $10, dropping to a third of its price in less than a week.

Due to the utilization of crypto mixing services by criminals and large-scale hacking groups, the government is rightfully cracking down on such services, which operate under the guise of providing users with financial privacy. While they offer a degree of privacy for those seeking to conceal funds on the blockchain, many criminals seem to utilize the same services to launder millions in stolen funds.

Disclosure: This is not trading or investment advice. Always do your research before buying any cryptocurrency or using any services.