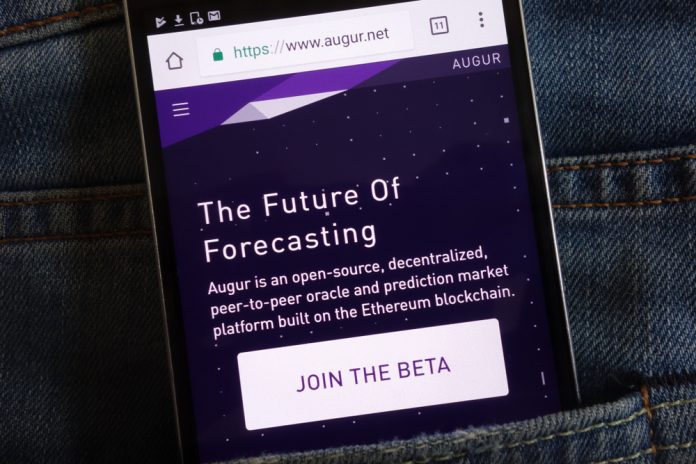 2018 will likely be remembered as a landmark year in cryptocurrency, as a period in which many of the early initiatives and well-funded ICO startups launched. While many of these projects have exciting and potentially paradigm-shifting capabilities, it’s also important to recognize that the realities of such developments do not always mirror the anticipated possibilities.

Augur was first announced in 2014, and was crowdfunded through an ICO in 2015. After years of development, Augur released its protocol for prediction markets on Ethereum’s main net this month. For supporters who have followed Augur from the beginning, this release was long-awaited, as prominent individuals had been indicating that the release was “right around the corner” since 2016.

Through the Augur protocol, users are able to create their own prediction markets regarding any real-world or digital event. These prediction markets are created as contracts on Ethereum, which can be executed with gas from a connected Ethereum wallet. The app supports MetaMask, Ledger, Trezor, and Edge wallets. Through the app, users can also place predictions on available markets by buying and selling Ether that represents “yes” and “no” responses to the prediction question.

If you’ve seen media outlets reporting on Augur, you’ve probably gotten the impression that it is being used for crazy ideas, as a prediction market regarding the assassination of President Trump surfaced recently. This is, of course, a scary concept for many, and perhaps a wildly fascinating one for others. Unfortunately, the implications of the recent news surrounding the protocol could not be further from the truth. In fact, beyond a lack of activity surrounding unethical predictions, there is a distinct lack of activity across the platform as a whole.

Currently, almost every single one of the 586 markets created on Augur are illiquid to the point where no meaningful betting is possible. Market shares represent 1 ETH. At the time of writing, there were roughly 4,650 shares across every prediction market. That number includes bets that have filled (where someone who puts a price on the “yes” or “no” side of a bet sees another bettor match them) as well as open bets that have yet to execute. While this may seem like a healthy number, it’s important to recognize that almost 3,000 of these shares are divided among just two markets – one regarding the price of Augur (REP) at the end of the year, and another for the price of ETH at the same time.

You can view existing markets on Augur here. It is evident that, beyond the first two or three markets, the margin (difference between ask and bid) quickly approaches double digit percentages, and in almost every single alternative market, the margin is too great to foster any meaningful sort of trade. In fact, of the 586 markets created, over 400 have seen zero volume and carry zero open orders.

Cryptocurrency markets represent over 80% of the total volume. A majority of this volume pertains to futures markets on Ethereum. Of course, Ethereum has been available for futures exchange for years now, across multiple reputable markets. While it’s a fun gimmick to do so on Augur, there is little innovation and a far less user-friendly experience compared to what is already available. For other niches, like sports, commodities, and even politics, there are already similar, far more popular alternatives.

Much of the lack of exposure is likely due to the difficulty associated with installing the Augur App. Downloading it entails selecting the right file from a Github link that offers eight separate downloads with zero explanation. Upon selecting the proper file, one must synchronize with the Ethereum blockchain, which will take most individuals a couple of hours. Even when everything has been installed properly, the interface for trading predictions is quite unintuitive, and none of the steps are accompanied by a guide of any sort.

The Augur (REP) token is currently valued at around US$30, giving the protocol a market cap of over $325 million. A small amount of REP is required to create markets, which is refunded upon successful execution by the creator. Additionally, REP can be staked to settle markets and indicate an outcome when the creator fails to do so. However, with the current activity on the platform, the cost to create a contract and the potential staking rewards are quite minimal.